Survive in the underbelly of the Galaxy, fight the Empire, wield The Force!

Characters in Star Wars games can operate in the illegal hives of scum and villainy, running spice or hunting fugitives. They can take on the Empire in clandestine ops and pitched battles. And they can explore the mysteries of The Force and follow the path of the Jedi. 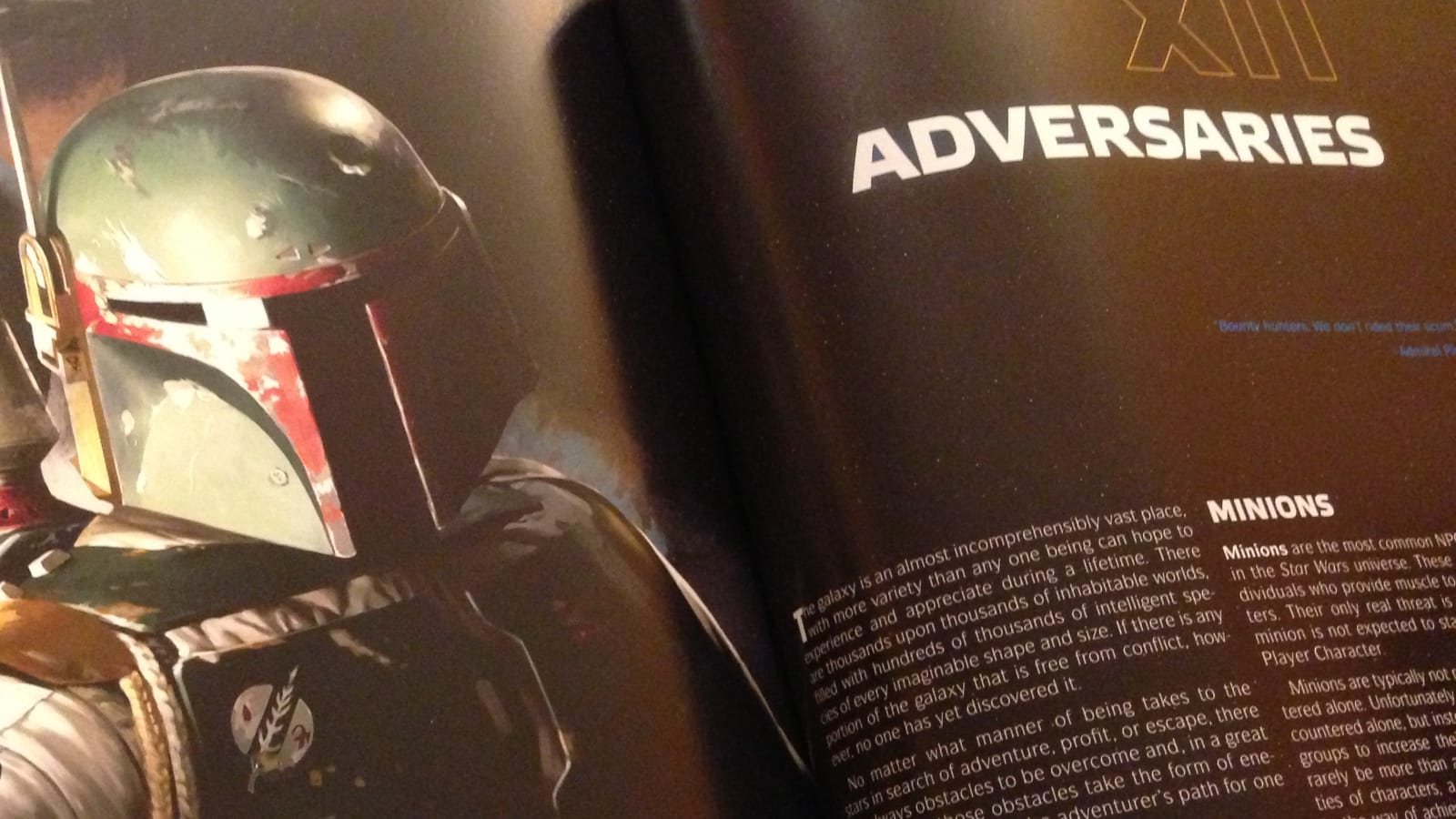 Given the breadth of the Star Wars setting, it’s not surprising that when it took over the license for Star Wars tabletop RPGs, Fantasy Flight Games elected to create three different flavors of the game, all using the same mechanics, but each emphasizing a different aspect of everyone’s favorite far, far away galaxy. Each is set in the interval between episodes IV (A New Hope) and V (The Empire Strikes Back), but creating a campaign set after The Empire Strikes back wouldn’t require much effort using any of these books.

Edge of the Empire embraces the grimy underbelly of the Star Wars galaxy. Want to outwit Imperial customs agents and get rich smuggling spice? Or would you rather fight the Hutts for control of a lucrative mining operation in an out of the way sector? The character Archetypes and opponents in Edge of the Empire emphasize frontier living, high-stakes criminal activity, and situations where the line between good and evil gets fuzzy.

Age of Rebellion takes the fight to the Empire. Characters in Age of Rebellion are clandestine operatives, combat pilots, and grunts – all united in their desire to rid the galaxy of the oppressive Empire. Player characters can operate as part of larger forces engaged in epic battles, or be sent on small but critical missions to undermine the Empire’s grip.

Force and Destiny is all about the Jedi and the Sith. This is the game you want if you’re looking for lightsaber duels and Force powers. Player characters are Force-wielders who have to ride the thin line between using their powers for good, and being found out by the Empire. The Empire will ruthlessly destroy those Force-sensitives it can’t subvert, so while PCs can become quite powerful, they are always hunted.

FFG has released boxed beginner sets and a core book for each of the games. The rules for all these games games use destiny points and a set of special dice to drive a narrative approach to task resolution.

Star Wars is oriented toward campaign play. Character specialization and advancement are familiar to anyone who has played a classes-and-levels game, and the tactical narrative mechanics support the system’s overall emphasis on simulating the pulp feel of the movies.

Three of the Things That Make Star Wars Stand Out

Development of Star Wars has been handed from FFG to its Asmodee Group sibling, Edge Game Studio. They are in the process of reprinting books originally produced by FFG.

Because of the handoff between Fantasy Flight Games and Edge Game Studio for production of Star Wars game material, availability of titles is in flux. However many game stores have Star Wars RPGs in stock. 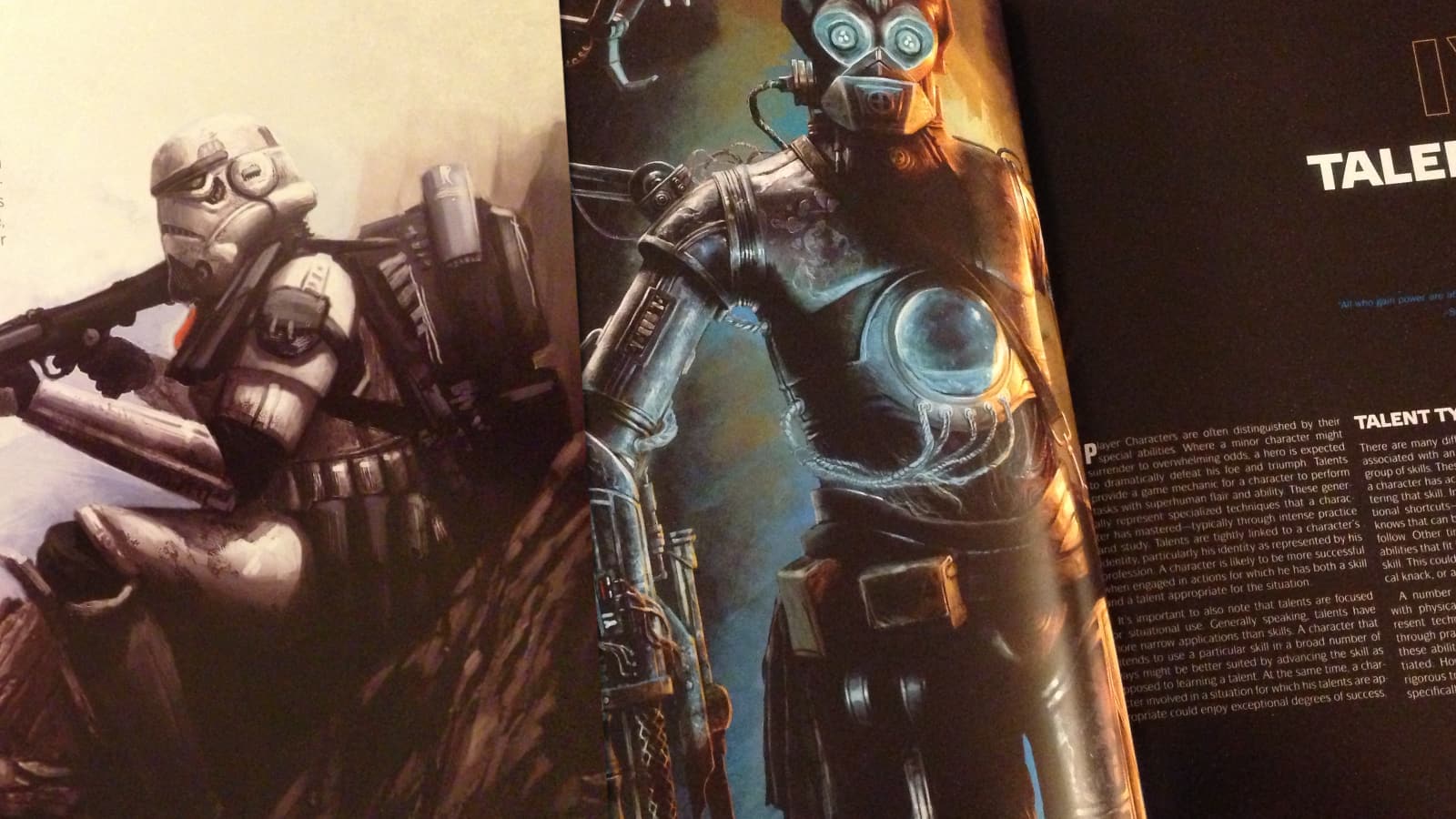