Star Wars: Edge of the Empire is a blast. We started playing on a whim, and the game consumed us for over 30 sessions.

The rulebook is gorgeous and filled with stylish, evocative art, though it could be better organized. The unique dice mechanics deliver exciting, cinematic results, the setting is instantly familiar, and player characters feel firmly grounded in the Star Wars universe while retaining the differentiation players crave. The few things about the game that didn’t suit us were easily disregarded.

If you thrill at the thought of exploring the seamy underbelly of Star Wars and don’t care much about the Force, you may just fall in love with Edge of the Empire.

The Players and the Campaign 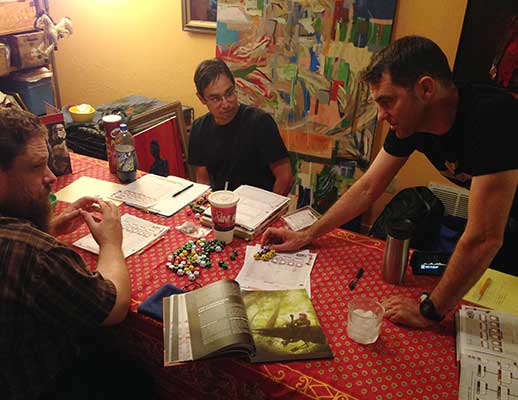 Though there were two other players who were involved for a time, the core gaming group for our campaign consisted of me, Matt (the GM), Manny, and Emerson. We’re all veteran gamers, each of whom has been playing RPGs for at least two decades. As a group, we like to try new games rather than sticking to one for years at a time. We tend to prefer games that provide a sense of deep immersion in the game world, we favor creating interesting stories over playing to win, and we’re suckers for rulebooks and supplements with solid production values.

Between us we have played a broad spectrum of games, ranging from Apocalypse World to Fate Core to RuneQuest to D&D in its many incarnations. We play every Friday night unless work or family activities cause a cancellation. We’re all Star Wars fans, but I was a bit skeptical of the game at first, suspecting it wouldn’t prove meaty enough for sustained play.

Matt started us on Tatooine, where our ragtag group came together. He’s a skilled gamemaster, adept at keeping the action moving and adapting to player initiative. I played Gunnar Sykes, a Hired Gun Mercenary. As a stormtrooper he had killed two officers and deserted, winding up on Tatooine alone and aimless. I enjoy playing characters who evolve over the course of play, changing their attitudes and motivations as they learn from their experiences. Manny played Taylon Pax, a Force Sensitive Mechanic. He enjoys playing heroic characters who come up with creative solutions to the challenges they face. Emerson played Dev, a Smuggler Pilot and scoundrel with multiple false identities, a penchant for lying, and a distaste for firearms. Emerson loves immersing himself in oddball characters that are quite different from himself, fleshing them out until they no longer seem so unbelievable.

Over the course of the campaign Matt used a mix of his own material and published adventures, and our characters developed a host of recurring enemies and allies. Gunnar got an arm blown off, Dev took down a feared bounty hunter, Taylon got the group out of many scrapes, and we managed to pull off several wild escapades. We thoroughly enjoyed the campaign, and never got close to exhausting the setting’s potential for adventure.

The Game System in Play 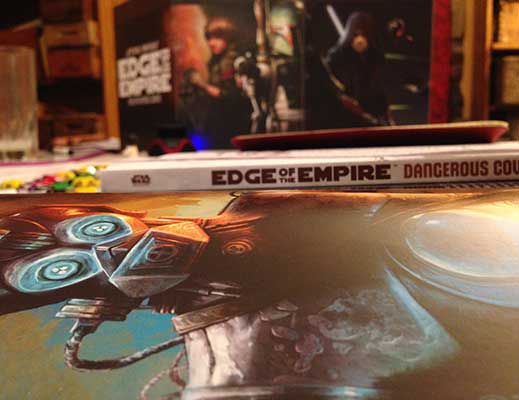 Characters in Edge of the Empire are assigned a Career, which broadly defines their base skills, and an initial Specialization. Each Career has associated Talents (ex: Second Wind gives Gunnar the ability to heal additional Strain once per encounter). Experience points are used to advance in skill ranks and Talents. In time they may also be used to add new Specializations. This approach to character creation and advancement will be familiar to anyone who has played a class and level system like D&D, but it also provides a more granular feel, as character improvements may be made in small increments.

Matt doled out experience points a bit more liberally than the rules suggest, but even though our characters became pretty strong, they never felt overwhelming. There’s an interesting balance that makes it difficult to kill a player character, but also impossible for PCs to routinely overwhelm their opponents.

We quickly dropped the Obligation mechanics, which are used to simulate debts the characters owe, bounties on their heads, or the potential for dangerous enemies to show up at just the wrong moment. We took Obligations at the beginning of the campaign, but Matt used them as as reminders and scenario seeds, rather than adhering to the rules for invoking them in play.

Fantasy Flight Games’ custom dice, which are included in the Beginner Game box but must be purchased separately for the Core Rulebook, take some getting used to — as Emerson put it, “At first, I was pretty pissed about having to spend fifteen bucks on a proprietary set of dice. Transcribing the rolls was a pain at first.” Then we started getting the hang of how the dice work, and we began to appreciate the benefits they provide. In a nutshell, they create the sort of dramatic, nothing-is-ever-certain feel of the Star Wars films by giving the gamemaster and players the ability to create a range of cinematic outcomes beyond mere success and failure

For example, in his first encounter with a loathesome bounty hunter paid by the Hutts to bring him in, Gunnar took at shot at the bounty hunter. The die indicated that he did not succeed, but he accumulated several advantages. We interpreted the advantages to mean that a big chunk of ceiling rock was carved off from Gunnar’s errant shot, generating a cloud of dust and making it impossible for the bounty hunter to return fire. So he took the opportunity afforded by the smoke screen and retreated to fight another day. 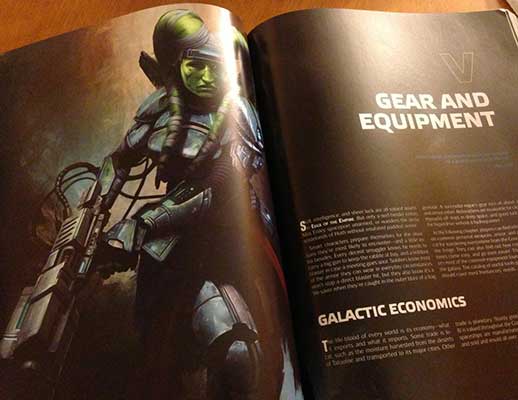 It’s important to note that while the tables in the rulebook provide specific outcomes for the interpretation of dice, they are merely guidelines. As soon as we realized this, it really opened up the full cinematic potential of the dice mechanics, as we quickly became adept at thinking up interesting effects for triumph, success, despair, failure, advantage, and threat results.

The die mechanics are paired with Destiny Points, which will be familiar to anyone who has played Fate Core. When the players or gamemaster want to tilt the odds in their favor, a Destiny Point may be flipped over to provide an extra boost. In play we found that this worked quite smoothly without overwhelming the other mechanics.

This brings us to the characteristics of the rulebook itself. It’s a lavish affair, with exemplary, evocative art and a depth of setting material. It is, however, difficult to navigate. Even after playing the game for months, we found it difficult to find certain rules. Sometimes important bits are tucked away in the main body of text, rather than called out visually for easier skimming in the heat of play. The writing, however, is clear and well-edited, and key concepts are coupled with useful examples throughout.

Matt was impressed with how well the rules support the gamemaster. As he puts it, “In all of the 30-plus sessions I ran, I only felt the need to create my own NPC three times. Most of the time I just flipped to the back of the book and find a close enough representative according to profession. Coupled with the exceptionally simple minion rules, this had far reaching implications.” Because he didn’t have to spend much time thinking about stats, he could focus on describing the game world and keeping the adventure moving.

The spaceship aspect of the game felt a bit lacking. Matt wasn’t happy with the complexity of the movements and actions, not to mention how they fit into overall game play. Thankfully in Edge of the Empire spaceship action is really just a means of injecting drama as the characters get from one place to the next, and Matt was able to abstract out starship combat to good effect. We all would have liked to see more descriptions of the ships – a deck plan or two would have really helped.

Don’t expect the Force to play much of a role in an Edge of the Empire campaign. The Force rules feel vague and underdeveloped, which isn’t a terrible hindrance given the fact that Force users really aren’t the central focus of the game. But if you want to play a Jedi-dominated game, you’re better off waiting for Force and Destiny and hoping that the fleshed out Force rules work well.

Although it’s entirely possible to run a satisfying Edge of the Empire campaign without anything more than the core rulebook, this is just the first of three Star Wars RPGs from Fantasy Flight Games. So we can expect to see a steady stream of supplements for some time.

Here are links to reviews and more info about all three of the FFG Star Wars RPGs.