Thinking About the Unthinkable

If a biological armageddon hits the United States, how do vaccines reach Americans quickly? In the event of a nuclear war, who gets the word out about who is in charge and what laws are being enacted?

If you’re planning backstory for a post-apocalypse campaign, these little details can add to the verisimilitude you’re trying to invoke. They’re even more useful if you’re planning a near-future apocalypse-in-progress campaign. For example, when the zombies take over, where’s the President of the United States hiding out? As the GM it’d be good to know, right? 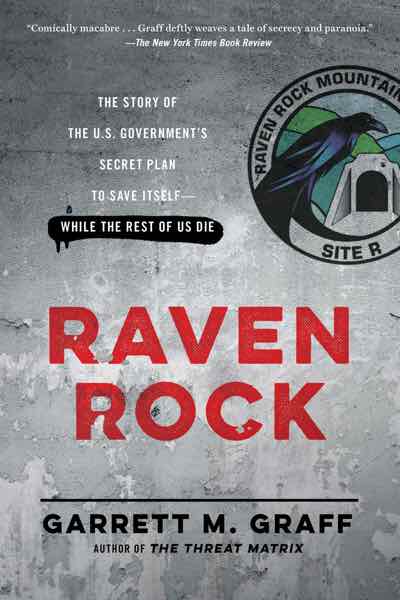 Fear not, intrepid gamemaster. The answers to these and other questions can be found in Raven Rock: The Story of the U.S. Government’s Secret Plan to Save Itself — While the Rest of Us Die, by Garrett M. Graff. This fascinating read is gold mine of information about everything from the history of Mount Weather and the details of tax exemptions in the event of a nuclear war, and the reason government bomb shelters became passé.

The book tracks the development of US government Continuity of Government (GOG) preparations from the early days of the Cold War to today. It’s a deeply-researched and engaging narrative of an undertaking that has truly touched every corner of the federal government, from the Department of the Interior to the Food & Drug Administration. It presents a solid overview and at times drills down into fascinating detail, describing things like the sleeping arrangements in Raven Rock, one of several underground bunkers built so key individuals could survive a nuclear war.

It also raises more than a few troublesome questions: Presidential succession and reconstitution of government aren’t nearly as clear-cut as you might think. Neither is the process for actually authorizing use of nuclear weapons when the chain of command is unclear. And whether true representative government could or would be maintained in the aftermath of a nuclear attack on America is an open question.

Born in the Cold War

COG planning originated in an era when the Soviet Union was the only enemy capable of striking American soil. So for decades the US government focused its attention on detecting inbound missiles, creating a redundant system for commanding a nuclear war, ensuring the safety of essential personnel, and maintaining a functioning government during and after Armageddon. As you might expect, some of this planning bordered on Panglossian in its willful disregard of uncomfortable realities.

Government leaders, for example, were expected to be delivered to secret bunkers, willingly leaving their families behind to die. COG planning called for the Commander in Chief to be whisked away to safety at the exact moment when he would need to make critical decisions that could save the human race or doom it to destruction. That doesn’t even touch on the main problem with managing continuity of government in the event all-out nuclear war: protecting the government doesn’t matter if it there are no citizens left for it to serve.

But despite its numerous flaws, the US government was earnest in its Cold War COG efforts. By the dictates of Mutually Assured Destruction (MAD) policy, it had to make the Soviet Union believe the US could survive a nuclear attack and launch a retaliatory strike. And in some aspects, COG systems were breathtaking in their rigor and effectiveness. Take the LOOKING GLASS project: command and control aircraft were aloft “twenty-four hours a day, 365 days a year, in all weather for three decades—some 42,000 continuous shifts right through to the end of the Cold War.”

Unfortunately, when terrorists struck on September 11, 2001, the sprawling COG system designed for Cold War proved woefully inadequate. Instead of hundreds of inbound ICBMs, the Air Force had to grapple with the technical and ethical challenges of hijacked aircraft being aimed at strategic targets inside the United States. It was a situation that directly contradicted US military thinking:

…in an exercise called POSITIVE FORCE in April 2000, the military tested scenarios meant to ensure “Continuity of Operations” if the Pentagon became unusable in the midst of a major war on the Korean Peninsula. As part of that exercise, though, Joint Staff officers rejected a scenario that involved terrorists crashing a plane into the Pentagon. It was “too unrealistic” and disconnected from the purpose of the exercise, officials decided.

The chapters on 9/11 and its effect on COG planning are gripping. They also give the lie to the omniscient, omnipotent fantasy version of America’s technology-reliant military we frequently see in movies and TV shows. Graff reveals just how much the US had relied on early warning in its COG planning, and how that crippled its effectiveness even in the limited circumstances of 9/11.

The government quickly turned its attention to upgrading hidden shelters and communication systems, reshaping them for a world in which attacks could come without warning. The book contains less information about the post-9/11 COG landscape than about the Cold War that preceded it, as one would expect. Too much is still classified. But it’s clear the US government is serious about overhauling COG for the 21st century, and this book provides plenty of seed material for an enterprising GM seeking to run a modern techno-thriller

Play It Straight or Play It Gonzo

You can tap into the material in Raven Rock whether your campaign is set in:

You can also use Raven Rock as source material whether your apocalypse is one in which technology triumphs and grandiose government plans actually work, or one in which everything that can go wrong does go wrong. The reconstituted US government can step out of underground bunkers after the bombs stop falling, fully in control of what remains of the military, ready to rebuild America. Or the bombs render all that planning and preparation moot, leaving those bunkers as nothing more than storehouses full of canned food and folding cots suitable only for scavenging.

There’s such a wealth of material in this book. You can use it straight, as part of a more or less believable campaign. But if you take the programs described in this book and pump them up to eleven, you’ve got plenty of material for a mutant-infested Gamma World-style campaign.