I was reminded of the power of genre tropes last night when one of the players in my Star Wars: Edge of the Empire campaign complained that because all the action in the game takes place in a single city on a single planet, it isn’t very Star Wars at all.

He was also bothered because the campaign is centered around the sneaky, duplicitous activities of underworld criminals. Looking for scum and villainy? This campaign is the place. But this player had reached a point where he was fed up with all these betrayals of what he expected from Star Wars.

We did have a Session Zero in which we talked about the style of the campaign. So it’s not as though fifteen sessions in we radically changed the tone of the campaign. But in his defense we’ve all been in the situation of thinking we could operate within a given framework, only to discover after a while that it’s just too much to endure.

The two things that bothered this player — being planet-bound in a Star Wars game, and playing morally ambiguous characters — seem to fit into different categories. The first is one of style. One of the things this player enjoys about Star Wars is the constant shifting of scenery; new places, people, and creatures are part of what makes Star Wars for him. The second is deeper, I think. It gets to the heart of what he looks for in a tabletop RPG.

Which Tropes Matter Most?

He mentioned that we already had a previous campaign in which everything was dark and gritty, and he really just wanted to get back to playing games in which the player characters could be heroic. That heroism is something that drew him to Star Wars. And who can fault him for that? Star Wars is all about doing the right thing even when the odds are stacked against you. Whether the player characters are fighting the bad guys on Tatooine or Hoth or Endor, they’re fighting the bad guys.

As we were originally formulating this campaign, I came up with the idea of really focusing in on a narrow slice of the Star Wars galaxy. Keeping the action in a single city would allow me to create the kind of PC/NPC relationships that really draw players ito a setting. It would also allow us to see the Rebellion from a distinctly different vantage point. While the extended Skywalker clan is flying all over the galaxy, what’s happening to average, everyday people? How do they decide what’s right for them in the face of this overwhelming conflict? How do they pursue their own goals when their options are far more constrained than those of lightsaber-wielding Jedi? 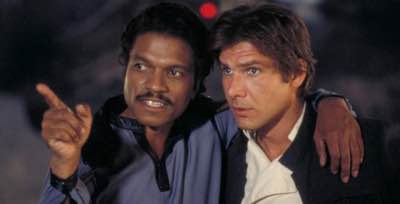 The other two original players were fully on board with this concept. We all thought it would be an interesting way to explore the setting from a different angle. To us the stories we were telling fit under the Star Wars umbrella because they occupied the same setting.

But we were abandoning a key Star Wars trope, which is that the main characters have to be heroes, even if reluctantly. Han Solo and Lando Calrissian were scoundrels, but in the end they proved themselves to be gold-hearted good guys. And by pinning the campaign to a single city, we were violating another Star Wars trope — no matter what, the main characters never stay in one place for very long.

Both of those tropes have been actively subverted in this campaign. Given that two important Star Wars tropes were flipped on their heads, is this campaign still really Star Wars?

The Spirit of the Thing

After thinking on it for a bit, I realized that I don’t really care. The question is pretty arbitrary. There are plenty of arguments already about which Star Wars movies are true enough to the franchise and which are somehow not Star Wars. I find those discussions not worth having, because if a new addition to a franchise can only be judged worthy based on how much it hews to what has come before, there’s no point in trying anything new.

Experimentation and reimagining an imaginary world can lead to wonderful results (Spider Man: Into the Spider-Verse) or unsatisfying ones (The Hobbit trilogy). Why is this? Ultimately it depends on whether the heart of the original is present in the new. What is it that makes the original tick? Why are people drawn to it? If you can find that core essence and build upon it in new an interesting ways, tweaking the supporting tropes without gutting the core, you can surprise and delight an audience.

Applying those criteria, my campaign is in some ways a subversion of Star Wars rather than an embrace of it. Three of us were fine with that subversion, because we were less concerned with having a 100% recognizably Star Wars experience than with exploring the dark underbelly of the setting. But for the fourth participant, once those particular pillars of Star Wars were removed, the setting itself didn’t hold much appeal.

I’ve enjoyed this campaign, which should be wrapping up after a couple more sessions. But the lesson I’ve learned is that when operating in a well-known, dearly-loved setting, it’s worth diving a bit further than the usual Session Zero discussion. Tropes are powerful, and should be handled with care.