This is a first look at a draft of Rune & Steel, a tabletop RPG that is being Kickstarted by the father-son team of Ryan and Kael Shuck. The game aims to provide a rich fantasy setting based on Norse mythology. Because this is still a work in progress I’ll hit a few aspects of the game I find most interesting, rather than attempt anything like a review. 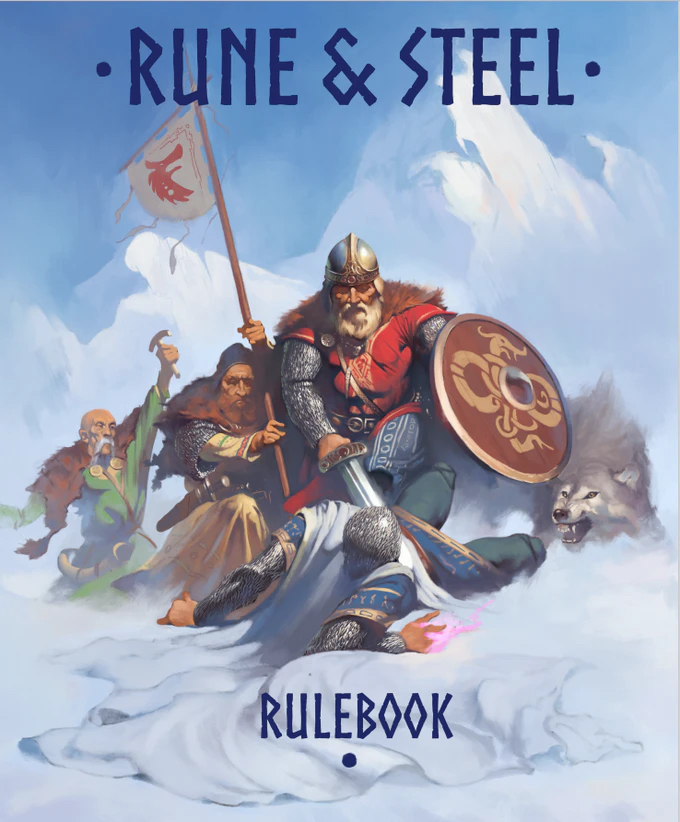 When I encountered the Kickstarter for this game, my first thought was of The 13th Warrior. I don’t know enough about the Viking era to know how far that film strayed from the factual past, but it did make me wonder about the roleplaying possibilities of a Viking campaign, particularly if magic were real in the setting. Rune & Steel does just that – it employs significant detail about what Viking life was like, and weaves in the races and magic of Norse myths. I can’t speak to the accuracy of the representation of the historical underpinnings or the mythology, but it’s obvious that much research was put into those aspects of the game.

The setting, known as Nordr, is low magic. The book describes six different cultures, each providing different advantages. There are also five Elder races, which are generally more powerful than humans and therefore aren’t intended to be used for player characters (though I have no doubt they will be in some campaigns). There are many creatures in Nordr, some mundane and some magical.

The game also incorporates social standing in a way that will be familiar to anyone who has played a game like RuneQuest or Degenesis, in which authority comes not from leveling up, but from a character’s position within the social order. The section on the Nordr legal system is something I wish more RPGs incorporated. Nothing cuts down on the impulse to murder hobo like the threat of outlawry. Rune & Steel also provides a truly extensive marketplace detailing the cost and characteristics of everything from a sculptor’s kit to soft wool to a stone wall. The armor and weapons sections are equally comprehensive.

In Rune & Steel characters are primarily defined by their proficiency in various skills, which can be purchased on character creation and improved over time. Skills fall into five categories: Physical, Outdoor, Discipline, Intellect, and Wisdom. Through point buy a character is assigned Lineage in each of those categories. Lineage affects how effective a character’s use of skills are in a given category. Each skill has multiple Proficiencies, which are specializations. So for example there are four Proficiencies for the Outdoor skill of Beast Mastery: Riding, Taming, Training, and Animal Empathy.

Character creation also incorporates rules for the effects of age (the older you are the more starting skill points, and the higher the probability of obtaining a flaw such as poor eyesight or kleptomania), and for determining personality type (such as Seer, Critic, or Loner).

The basic form of magic for low magic campaigns is Rune Reading, which is a form of divination. Additional rules describe spellcasting for higher-magic campaigns in great detail. I’ve long felt that magic should have the potential to harm a caster as well as its target. Rune & Steel handles this via degrees of spell failure, which can be quite serious – death is one rare possibility.

Task resolution operates along two axes: Success Number (SN) and Difficult Check (DC). The Success Number is usually 6. A number of dice equal to a character’s skill rank are rolled, and each result that meets or exceeds the Success Number is counted. If that count is equal to or higher than the Difficulty Check value (set by the GM), the attempt is successful.

There are also rules for critical success and failures, as well as Fate Dice, which can be used to fend off failure. Negative Fate Dice can also be used by the GM to make life more difficult for player characters.

Combat proceeds in three second Rounds, and there are four different types of actions that can be taken: Instant, Fast, Deliberate, and those that take more than one round. One Instant and Two Fast Actions may be taken in a given Round, or a single Deliberate action, or part of a Multi-round Action. The rules incorporate evasion and parrying, weapon reach, special effects by weapon type, and hit location. Optional rules even go more granular, providing special Abilities such as Feint and Redirect.

There are also rules for siege warfare, mass combat, and naval combat.

This is not an examination of the final product and the draft I examined had no artwork, so I can’t speak to the quality or quantity of the art in Rune & Steel. The layout is likewise not final, but is workmanlike in its current state, if dense.

There is no introductory adventure in the core rulebook, and no real guidance about how to construct adventures for Rune & Steel. What do player characters do in the game? GMs interested in this game may already have their own ideas based either on fiction built around Norse mythology, or on other sources of inspiration, but the core book gives no guidance. A starter adventure PDF is part of the Kickstarter campaign at certain pledge levels.

Rune & Steel is a mechanically complex system. That means different things to different people, but in this context it means more complex than D&D. Character creation involves more dials, combat is more granular, and skills and magic are not as straightforward. This is a game with many charts.

As with any complex RPG, the tradeoff for that complexity can be rewarding, but only if that complexity delivers a richer experience. I can’t speak to that, as I haven’t played the game. That said, this is not a game for tabletop RPG newcomers – it has too many moving parts. If, however, you are enticed by Viking history and Norse mythology, and you’re not afraid of a system with a lot of crunch, you may want to check out the  Rune & Steel Kickstarter, which ends January 29, 2021.