Wreck Age is a post-apocalypse roleplaying game built around a miniatures skirmish combat system. The rules focus on the group rather than the individual, and resource management drives campaign play. The result is a refreshingly different post-apocalypse game.

A World That Slumped Into Oblivion 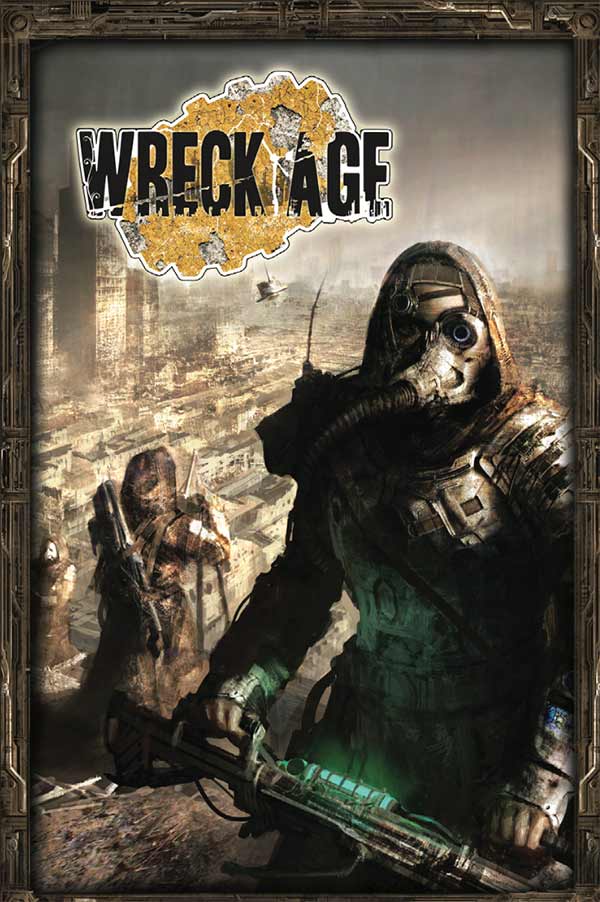 Earth became unfit for human life. A fortunate few took to the stars, leaving the rest of humanity to fend for themselves. Two centuries later, the descendants of those left behind are venturing out of their enclaves and rebuilding civilization

The amazing technology created at the pinnacle of human civilization lives on and is used by many survivors, alongside new adaptations and technologies as old as human civilization. People make use of what they can find, improving it where possible, adapting it to serve new purposes if necessary.

Nobody survives alone in the 26th Century. Your community is everything. From it you obtain food, clothing, weapons, knowledge, and the assistance you’ll need when confronting rival groups. Sometimes combat is unavoidable. It is quick and deadly; you must be prepared for it at all times.

Wreck Age lays out a dystopian future that leads to a wholesale Wall-E style departure by the haves, which leaves the have-nots to squabble among themselves over the polluted, bombed-out remains of civilization. Without going overboard, the future history incorporates plenty of hooks that could be used by a clever GM to construct all kinds of scenarios.

I love that Wreck Age plays it straight. This is not a comical, play it for laughs version of the apocalypse. It’s not deadly serious, either, but this is a hardscrabble setting, the stakes are high, and the designers stick to their vision.

In keeping with the overall emphasis on believability, Wreck Age stays away from mutants and overpowered technology. What high technology does exist primarily helps teams communicate with each other, rather than obliterate their enemies. This makes sense within the game world, as any group possessing radically superior destructive power would already be running the show. 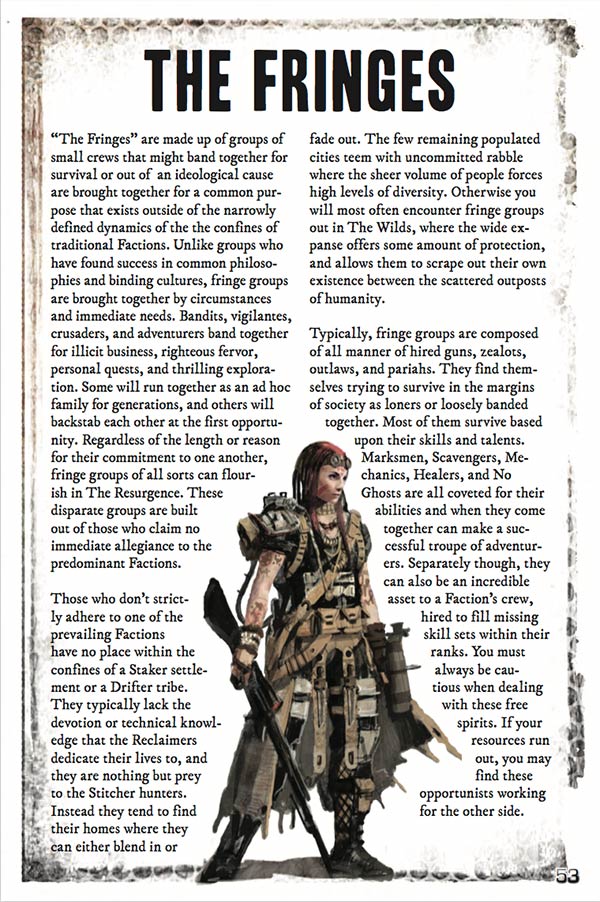 In keeping with the heavy emphasis on multi-character combat, this is not a murder hobo game. The player characters aren’t unaffiliated vagabonds wandering the blasted remains of what use to be. They’re part of a community, and the importance of community is locked in with mechanics that make character creation and improvement dependent on available community resources.

This gives characters a reason to be together, and it strongly reinforces group goals. In the world of Wreck Age, you serve your community and the community gives back to you. From a game perspective this is a clever forcing function that drives adventures and gameplay.

It’s also useful because it makes the game world come alive. Communities come into conflict over resources or ideology, and player characters are a part of those conflicts. Everyone is trying to move civilization forward in their own way, and ties to community mean players will always be a part of that. This purpose-driven approach gives Wreck Age a far less nihilistic feel than many post-apocalypse games.

The core mechanic is the skill test. The player rolls a number of six-sided dice equal to the governing Attribute (such as Wits) plus a number of dice equal to the required skill (ex: Explosives), with the goal of meeting or exceeding the target number. For extremely high target numbers, each 6 beyond the first adds 1 to the total. So rolling 6 three times would provide a result of 8. Also, certain types of tests require multiple successes. Combat is the steak and potatoes of this game, and it is explained well. Sometimes key elements are restated more than once, and the designers take great pains to make the rules digestible.

The assumption is that miniatures will be used in combat, and the system relies this assumption. Fights are quick and deadly. Players can run multiple characters, with one serving as the player character and others as followers.

This is not a game in which the good guys heroically charge in and mow down hordes of hapless mooks. The rules emphasize the role of morale in combat. Characters can get pinned down by enemy fire. They can lose their nerve and freeze in place. They can even get routed and flee when the odds are too daunting.

It’s easy to imagine a campaign filled with ongoing but inconclusive fights like the ones you’d see in TV shows like Revolution and The 100. Because this is a skirmish system, you can even play it as a pure player v. player minis combat game if you like.

You must use distressed edges. Somewhere in The Great Book of Layout Rules for Post-Apocalypse Games, that directive appears, bold and unavoidable. You can’t escape some tropes, even when they make it harder to read the rules. Wreck Age also contains a few extended chunks of reversed italic type, which can be difficult to read. This book packs the content in, with tight leading and minimal white space. The almost colonial-looking serif type used throughout is a clever choice, but lack of typographic variation makes some pages look like a wall of text.

Wreck Age includes some good art, particularly the faction illustrations. It would be nice to see even more of it, because it does such a good job of evoking the feel of the setting. The PDF doesn’t incorporate links, which is a shame. However, the text is easily searchable in both Preview on the Mac and Dropbox on iOS. 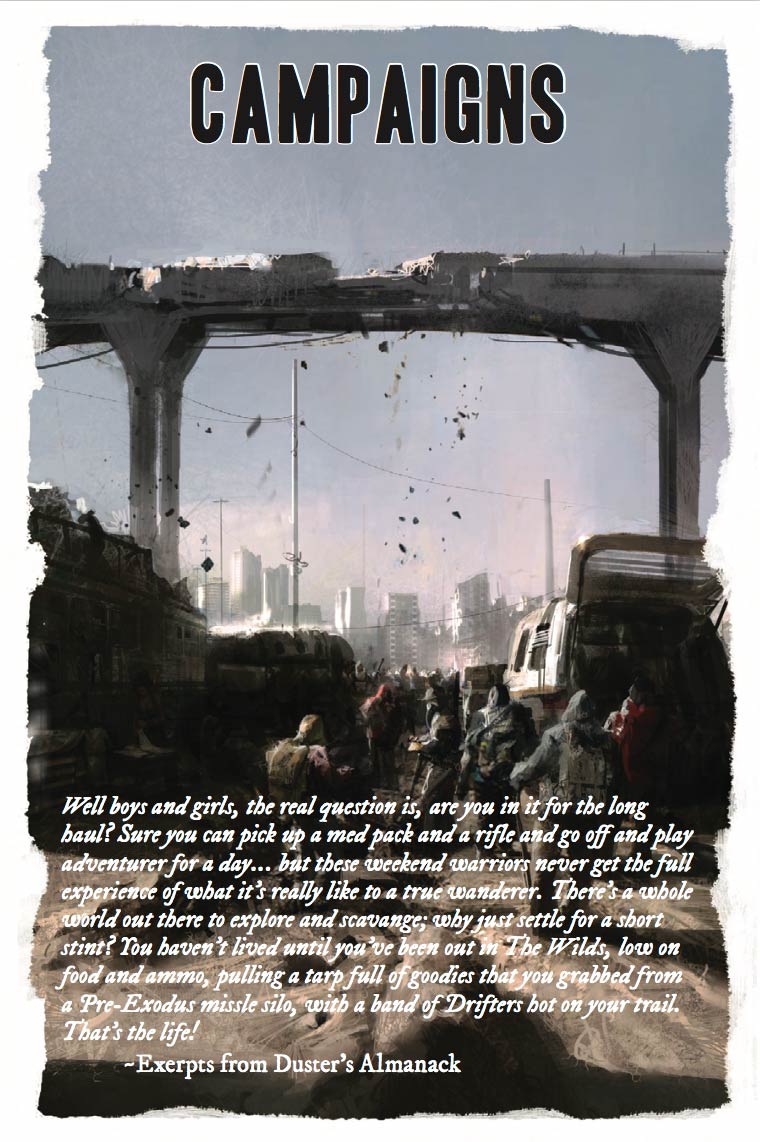 I’ve run several post-apocalypse campaigns over the years, using a variety of games: Gamma World, Aftermath!, Twilight: 2000, Basic Roleplaying, Apocalypse World, Twilight: 2013, and NEMESIS. The biggest challenge for me and my players in these campaigns has been giving them viable motivations.

Wreck Age nails this, by anchoring player characters in their communities in a way that feels organic rather than forced. The book also comes with several excellent adventure hooks and encounters, plus guidance for gamemasters.

The game system is straightforward, which is a double-edged sword. It will get out of your way, but some players may become bored by a system that doesn’t give them much to fiddle with and optimize. The emphasis on combat means that nuanced social combat and other dramatic situations aren’t covered. But the system appears to be flexible enough to allow for house ruling where necessary.

For many years I haven’t seen any compelling reason to use minis at the table. Wreck Age makes me want to haul out the battlemat and the old minis collection just to see how this fusion of wargaming and roleplaying works. If I hadn’t just wrapped up a post-apocalypse campaign, I would be pitching this game to my group. Its tight combat rules, emphasis on communities, and intriguing backstory make it stand out.

Hyacinth Games provided me a PDF of Wreck Age for this review. You can purchase Wreck Age in softcover + PDF directly from Hyacinth Games, or grab the PDF from DriveThru RPG.