Solo: A Star Wars Story didn’t grab me at first, but as it progressed I found myself sucked into the story. It’s not my favorite Star Wars movie by a long shot, but I grade it a solid B.

As an Edge of the Empire veteran, I was struck by how much the movie felt like the first few sessions of an EotEc ampaign. If you ever thought about playing EotE but weren’t sure what it would be like, watch Solo. It demonstrates what EotE is all about. 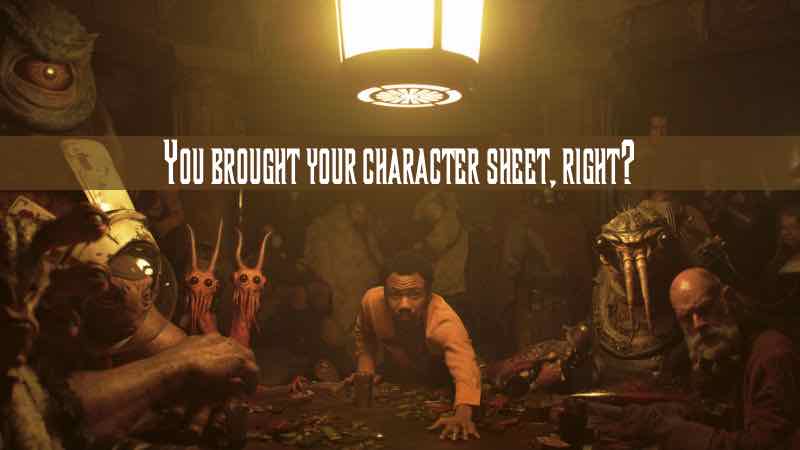 In the criminal underworld that dominates both Solo and Edge of the Empire, almost nobody is truly free, able to do whatever they want. This may seem like an unnecessary constraint, but in a galaxy as wide open as Star Wars, it helps drive conflict. And that’s where things get exciting. The game’s Obligation mechanics give GMs the tools to generate adventures and keep the players off balance.

Nobody is Ever Safe

It might be obvious that those on the lower rungs of the criminal underworld are vulnerable, Solo makes clear that everyone, from street rat to big-time thief to crime lord is paranoid with good reason. Success in the world of EotE only makes you a bigger target for the rest of the scum, and there is no honor among thieves. In Solo as in EotE, you never really can get comfortable. At least, if you want to live.

Everyone Has an Angle

In Edge of the Empire, almost every character you’ll encounter is enaged in something underhanded. Smugglers pretend to be honest merchants. Hired Guns protect those who pay them, but only when the odds are right. Colonists avoid Imperial tax officers. Nobody is on the up and up. In Solo the drama is built around the premise that each of the core characters is looking out for number one, and that captures the spirit of EotE as well.

The fact that you can’t trust anyone makes true friendship more valuable than anything in the galaxy. Solo demonstrates this repeatedly. More than in most tabletop RPGs, EotE  requires player characters to guard each other’s backs. Player characters can rely on only a very few people, and trust among PCs is particularly important in this game. That doesn’t mean they can’t argue and come into conflict with each other, but when someone is always after you, it pays to have a crew that can hold together through thick and thin.

No Risk, No Reward

Some games reward meticulous planning, because a single misstep can mean PC death. Edge of the Empire doesn’t work that way. While you’ll make plans in EotE, as the characters in Solo do, things can and will go wrong, just as they do for Han Solo and his compatriots. But the game mechanics support flashy improvised action, and a good GM will encourage it.

If you haven’t already given Edge of the Empire a spin, check out the free quickstart PDF or take a look at the UJ game page for Star Wars.