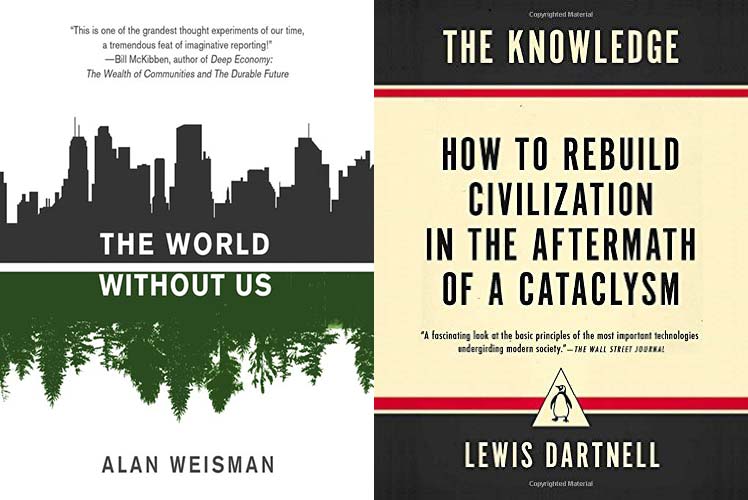 Maybe it was a zombie apocalypse. Perhaps an alien plague wiped out civilization. Or it something we engineered ourselves. Regardless, most of humanity is destroyed.

What happens to the buildings, bridges, and dams when we’re not there to look after them? How long will concrete and steel resist armies of vines and rust? Which animals will rule over the ruins we once called home?

And when humanity rises from the ashes, how will it climb slowly back up the technology ladder? What will humans need to know to protect themselves, grow crops, and reconquer nature? Where will we settle, and what hard-won knowledge will we recover first?

If you’re running a gonzo Mad Max or Gamma World campaign, you don’t have to ask these questions. But if you want to build a post-apocalypse setting that feels more realistic, a little research doesn’t hurt. And more than a little research really helps.

Both of these books are thought experiments. They’re not survival manuals for doomsday preppers; The World After Us was written so readers could better understand our natural world, and The Knowledge describes how layers of human discovery build upon each other. Even if you’re not planning a post-apocalypse campaign, each is quite illuminating in its own way.

The World Without Us

The World After Us imagines that humans suddenly vanish from the earth. What would happen to the planet without us around? By extrapolating from evidence found in places as diverse as Cyprus, Chernobyl, the Korean DMZ, and a primeval forest in Poland, Alan Weisman describes which parts of our built-up world would buckle first. He paints a picture of how cities would fall apart, of how our creations would break down and degrade, which animal species would go down with us, and how nature would take over as decades marched on.

There are more than a few surprises in this book. I was struck in particular by just how rapidly water, fire, and wind would take down mighty cities. Weisman’s description of primeval forest made me realize we’ve been bending nature to our will for so long that the resurgent forces of nature would astonish and frighten survivors of a human apocalypse.

The Knowledge: How to Rebuild Civilization in the Aftermath of a Cataclysm

The Knowledge posits that humanity has almost wiped itself out. But it’s hard to obliterate humanity completely. There are a lot of us, we’re spread all over the place, and even with our best efforts to destroy ourselves it’s likely a few hardy souls would survive.

Still, it takes time to rebuild civilization. You don’t writing without paper, and you don’t get paper without alkaline solution. Dartnell breaks technology down to its fundamental building blocks, and offers ideas about how those blocks might be rediscovered and combined.The Knowledgecovers everything from agriculture, clothing, medicine, power, and communication, to substances, transport, and advanced chemistry.

As an aside, I wish my high school chemistry teacher had talked about his subject the way Dartnell does. I hated chemistry and wanted nothing to do with it for decades. Reading The Knowledge has given me new found respect for the discipline, and admiration for its practitioners.

Using The World After Us and The Knowledge in Campaign Planning

Each of these books offers insights for game masters of the apocalypse, and they work well in tandem. Weisman describes how technology would degrade over time, and Dartnell describes how it gets reinvented. For example, even though we’ve all seen and read stories of apocalypse survivors rebuilding in the ruins of tottering ancient cities, Weismann makes it clear that those ancient metropolises would become flooded, burned out, and overgrown quite rapidly. Dartnell points out that while survivors would scavenge in the ruins, they would build new settlements at the edges of those dead cities.

Particularly in decades-after-the-apocalypse scenarios, scavenging runs to these deserted cities would be less about finding ammo and more about gathering glass and noble metals for melting down and reusing. A mission to find a hidden seed bank could turn the fortunes of a survivor community.

With these books in hand, you can concoct just the right blend of still-functioning pre-apocalypse tech and newly-created inventions, and set it all in the midst of a world that looks nothing like the one we live in today.

One final tidbit: After reading The World Without Us, you’ll know why your setting likely should have irradiated zones, even without a nuclear war.