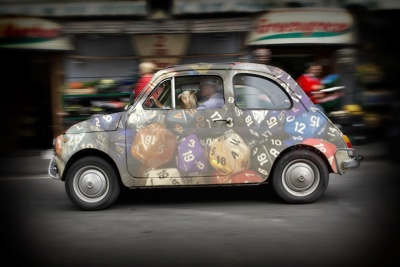 Most game masters have at least a few campaign ideas rolling around in their heads. It’s a natural outgrowth of the GM mentality, because you’re always on the lookout for new ingredients to add to your game.

Adding too many ingredients spoils the stew; dropping dwarf-manufactured robots into your 13th Age campaign might work, but that and a Nazi alien invasion might be a bit much.

So we put aside those nifty ideas, and sometimes they stick together and become the foundation for a potentially cohesive campaign. I was made acutely aware of this recently while listening to a worldbuilding episode of the always excellent Mud & Blood podcast. It reminded me of a few of my old campaign ideas, none of which ever really grew into a full-blown campaign. Maybe one or more of them will serve as inspiration for you. Notice a theme running through all three?

I’m an amateur historian, and I find much inspiration from real human events. They’re often much stranger than anything I could dream up on my own. This particular campaign idea is based roughly off the Cold War divisions that kept West and East Germany separated, and continue to divide Korea. Imagine a chasm, straight and deep and broad, running through a continent. Magically-created, this chasm separates two lands, one of which is populated by the evil folk: elves, trolls, gnolls, and others. The evil folk use tainted magic and live to destroy the good folk who live across the chasm.

The good folk are dwarves, humans, and mixed-bloods, who only use righteous magic, and are ever-vigilant against encroachment by the evil folk. There are constant commando raids, recon missions across the chasm, and all kinds of spies and subterfuge as each side attempts to gauge the strength of the other. The good folk fight to defend their land, the evil folk fight to conquer. Or is that really the way of things? As the PCs gain more power and fight the evil folk, they see things that contradict the narrative. They can’t help but wonder what’s really going on. And eventually they discover that a tremendously powerful, truly evil lich is manipulating events, keeping both sides on edge, deriving strength from the fear and hate that this Cold War generates. The mission becomes clear: the lich can’t be eliminated unless the PCs can get the two sides in this Cold War to unite against it.

Alien invasion scenarios are usually about aliens wanting to take over and occupy Earth. But what if they’re essentially just amoral ultracapitalists who just want to make a buck? They send out sophisticated exploration pods throughout the galaxy, aiming them at promising systems. When a pod reaches a planet with promising resources (water, specific minerals, flora, fauna), the pod lands, sends out pathogens that affect only the most intelligent creatures, wiping most of them out within a few years. The pod sends word back to its home system, and its alien owners send out ships full of robots (or clones, or hybrids of some sort) to start scooping up all the valuable resources and shipping ’em back to home.

The surviving humans fight the workers, and after many grueling fights it becomes clear that the workers aren’t the real target. The humans have to make Earth too costly for the aliens who sent them. The aliens send mercenaries to clear out the annoying humans, fighting them on an Earth being methodically destroyed by the workers. Will the humans succeed by wiping out the mercenaries, or will they have to take the fight to the mysterious aliens who call the shots, forcing them to leave Earth alone so they can stay in the black?

Games that fuse magic and cyberpunk aren’t new. But remember what I said earlier about too many ingredients spoiling the stew? This setting removes elves, trolls, and the like. Gone are dragons and spirit creatures. And corporations really do run everything. Five supercorps control the planet, while a weak, ineffectual global government pretends to set the rules. It’s an oppressive, regimented world in which technology allows the powerful to control every aspect of everyone’s life.

But there are outsiders. Rebels, revolutionaries, and rogues who work to turn low-level supercorp conflicts into multi-sided wars that weaken the system. And their biggest weapons are biotechnology, which unlike cybertech can’t be tracked, and magic. There are a few people who have discovered quite by accident a way to manipulate the primal forces of the universe and turn it to their ends. Magic is wildly unpredictable, extremely dangerous, and absolutely illegal. Even aiding a magic-wielder can get you the death penalty. But without magic, there’s really no hope. So the PCs use it to fight the power and give the rest of humanity a chance for real self-determination.