Ever since the iPad was first announced in the distant mists of time (2010), I’ve wanted an iPad with a screen large enough to easy read and annotate PDFs. In the intervening years the need has only grown, as I’ve shifted the majority of my RPG purchases from print to PDF. So when the 12.9″ iPad Pro was announced, I was eager to get one. It took a few months, but eventually I was able to make the purchase.

I’ve been using my new 12.9” iPad Pro as a tabletop roleplaying tool for several weeks now, both as a player and as a gamemaster. Note that I’m already fully bought into the Apple ecosystem, and this isn’t a comparison of the iPad against other available tablets or an overall review of the iPad Pro. I’m merely outlining how I use it at the table. The model I’m using is the 256Gb WiFi-only with Smart Keyboard and Apple Pencil.

For the last several years, I’ve purchased most of my game books as PDFs. While laptops are fine for PDF viewing, they’re not really optimized for it. The landscape orientation of the screen conflicts with the portrait orientation of most rulebooks, and the laptop itself takes up vertical as well as horizontal space at the table.

The 12.9” iPad Pro provides a wholly different feel. PDFs fit the screen much better, and the ability to interact with a PDF directly makes it feel more like a printed book. After trying several PDF viewers, I’ve settled on PDF Expert.

It pulls directly from iCloud and Dropbox and provides a host of nifty features in a clean interface. Most importantly, it is fast. Pages render immediately, following links within a PDF produces no discernible lag, and searches are instantaneous. Toggling from one PDF to another is dead simple, and doesn’t create lag. The highlighting and annotation tools are particularly handy. 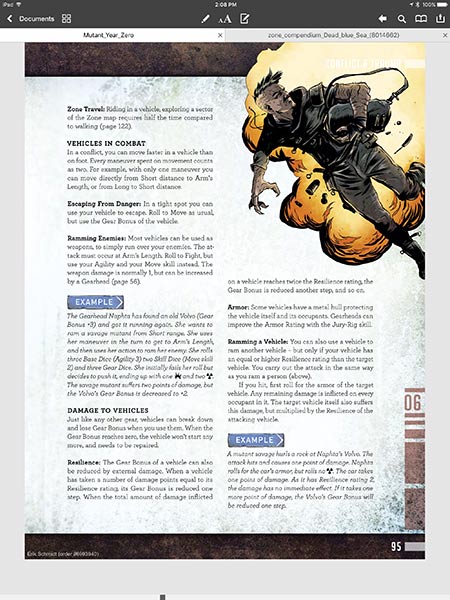 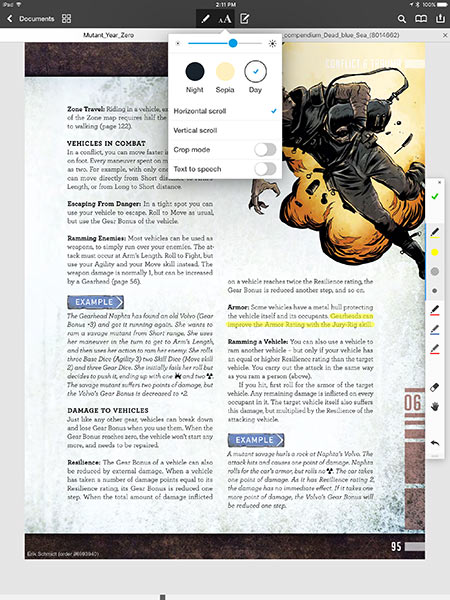 Currently I’m using a paper character sheet, primarily because the character sheets for the Conan game we’re playing are in flux. Once they get finalized, I’ll start using PDF Expert for my character sheets. I have noticed that on occasion when I have multiple PDFs loaded in PDF Expert, it will crash. Recovery from a crash is swift, however, and PDF Expert on the iPad Pro delivers a much better overall experience than using Preview on my 2015 MacBook Pro.

As a player I like to take extensive session notes, and as a GM I need to produce both prep notes and session notes. I’m something of a writing app junkie, but after much experimentation I’m really enjoying Bear. It employs a clean, bare-bones interface with a pleasing aesthetic, exports in a variety of formats, and uses a clever tagging system for creating document hierarchies.

I really like how iOS allows me to keep PDF Expert open at full screen and slide Bear out to take notes. Because Bear reflows text automatically, I can keep it tacked to the right side of the screen without having to open it out all the way. This makes shifting between rulebook and notes extremely fluid. 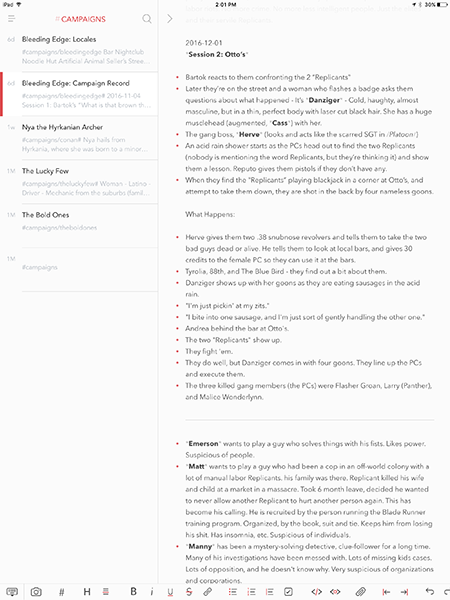 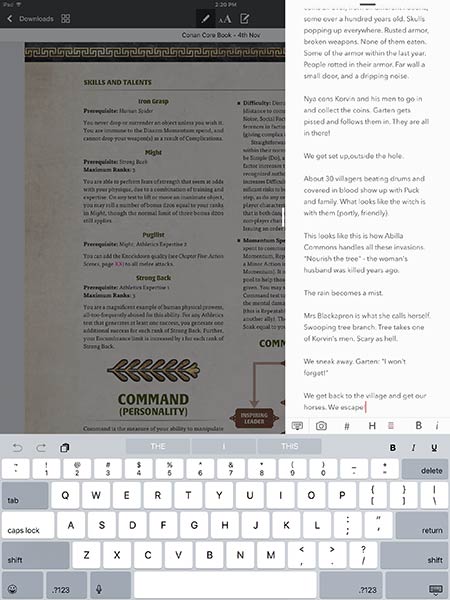 Generally I use the Smart Keyboard when I’m GMing, primarily because as a GM I’m constantly making notes and searching within the rulebooks and my notes. Keeping the screen vertical also helps me avoid accidentally revealing GM-only information. When I’m a player, I don’t use it, primarily so I’m not adding a vertical barrier at the table, and because I’m doing less typing as a player and more flipping through the rulebook.

Our group doesn’t use miniatures, and we rarely even draw things out on a battlemat. However, there are times when clarifying what’s going on in a scene really helps. Paper by 53 is my go-to for drawing. With the Apple Pencil, I can quickly sketch out a top-down view of the action. It really is faster than using dry erase marker, because erasing a mistake (a frequent task for me) just takes a tap of the finger.

I’ve started creating annotated maps in Paper as well. I spend 40+ hours a week at a keyboard, and using the Apple Pencil to draw and write notes feels really liberating. While I could do this prep with real pencil and paper, I get better end results using the iPad Pro, the output is more flexible because it’s already digital, and I don’t have to haul out the physical materials. 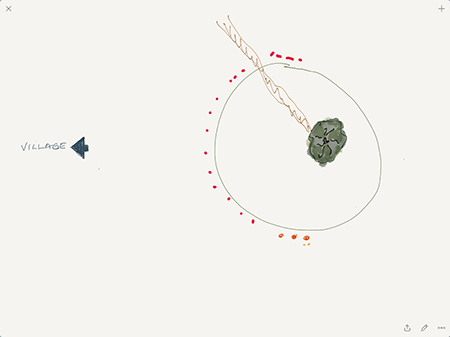 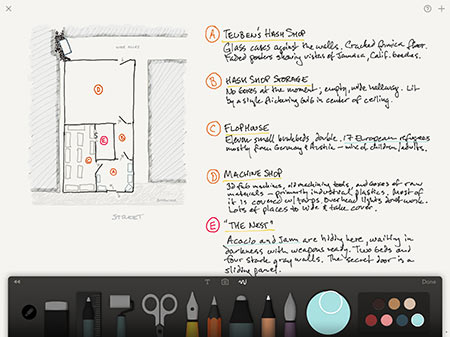 The clarity of the iPad Pro’s screen is amazing. Showing the players a visual prop with the iPad Pro is a lot less messy than giving them printouts, and easier and more hands-on than turning a laptop to show them the screen. As with PDFs, it handles images in landscape and portrait orientation.

The iPad Pro’s battery life is more than sufficient for a long night of gaming, and the overall performance is excellent. The iPad Pro easily handles streaming audio to a Bluetooth speaker while churning through huge PDF files and keeping notes at the ready.

I’ve only just begun to tap the iPad Pro’s potential as a tabletop RPG tool. In particular I have yet to explore the wide variety of iPad apps designed specifically for tabletop roleplaying. There’s something about the tactility of the iPad Pro that really works well at the table, and I’m looking forward to seeing how I can get even more out of it.