As I devoured Fantasy Freaks and Gaming Geeks last weekend, I wondered what had kept me from reading the book much earlier. It had been well reviewed by geeks and non-geeks of all stripes. The author, Ethan Gilsdorf, was born a year before me. Like me, he had spent the bulk of his teenage years playing Dungeons & Dragons. The stars, as they say, were aligned. So why had I waited so long to read the book?

Fittingly, the answer to that question revealed itself as Gilsdorf’s narrative progressed. Like the author, I embraced fantasy wholeheartedly in my youth. Like him, I have also had a conflicted relationship with it as an adult. And I felt trepidation about confronting and examining that relationship, just as he did.

Ethan Gilsdorf played a lot of D&D in his teens. Then, in pursuit of adulthood, he gave it up. Years later, drawn by the pull of Lord of the Rings movie fever, he decided to investigate what fantasy meant to others and to himself. He embarked on a zig-zag journey, traversing locales as varied as Atlanta, Milwaukee, and New Zealand. Along the way he spoke with MMO players, LARPers, Tolkien fans, castle builders, SCA members, and tabletop roleplayers.

There is no way to discuss the role of fantasy in our society without addressing the stigma associated with fantasy pursuits, and this issue permeates the pages of Fantasy Freaks and Gaming Geeks. Gilsdorf confesses that while he’d “missed D&D’s weekly ritual of camaraderie and fellowship,” he left the game for familiar reasons:

I had not quit D&D from disinterest — I loved playing. I stopped because I’d wanted to be cool. 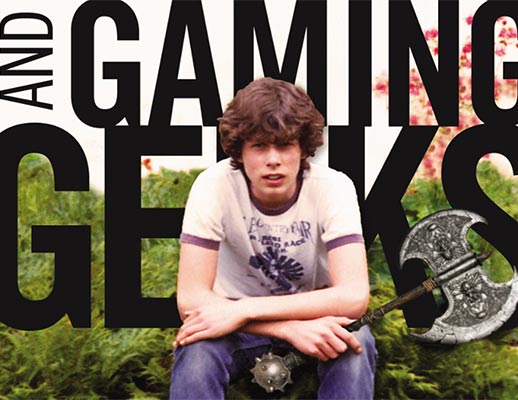 It’s a profoundly frustrating social force. Why is it that engaging with fantasy is seen as proper only when it’s done within narrowly proscribed boundaries? It’s easy to understand the annoyance of Gamma World designer Jim Ward, who vents to Gilsdorf, “That gamers are portrayed as nerds drives me nuts.”

So why do people immerse themselves in fantasy, at the risk of being perceived as odd, out of touch, or worse? Fantasy Freaks and Gaming Geeks casts a sharp light on questions of identity and belonging. The inquiry reveals that a wide range of people embrace fantasy in its various forms, for many reasons. This doesn’t surprise me, as I’ve played tabletop RPGs with everyone from real estate agents, tech CEOs, and accountants; to programmers, musicians, retail employees, soldiers, and graphic designers.

Gilsdorf seems to learn something from each of the geeks and gamers he weaves into his tale, and he shares his findings in an endearingly casual, non-judgmental, and slightly self-depricating fashion. He is wide open, not just about his explorations into the inner lives of others, but about himself and his own past. This for me is the big surprise of the book.

It’s a touching and deeply personal account of a man trying to understand his relationship with his mother, how fantasy helped him cope with a difficult reality, and what fantasy means to him as an adult. As I read it I would often stop and think about how Gilsdorf’s experiences as a gamer, as a geek, as a son, and as a person mirrored and diverged from my own.

The conclusions Gilsdorf reaches about the the value of fantasy seem simple to the point of obviousness, but that’s really only because along the way he has carefully exposed a mosaic of geeks and gamers as real people, rather than flat caricatures. The evidence he presents is primarily anecdotal, but it’s been gathered through serious and determined inquiry.

Even more interesting and more complex are Gilsdorf’s realizations about the role of fantasy in his own life. We all determine, consciously or otherwise, how fully we embrace fantasy and how obvious we are in doing so. With whom do we share our fantasy pursuits? How deeply are those pursuits embedded in our sense of identity? Reading this book has helped me better define my own answers to those questions.

Fantasy Freaks and Gaming Geeks is a surprisingly compelling and thought-provoking book that manages to fluidly combine personal memoir with deft social observation. I heartily recommend it to anyone who embraces fantasy, or anyone who is mystified by those who do.

Check out the author’s Buy the Book page and see all ways you can purchase the book.