2022-06-29: Sadly this project has been managed very poorly and is effectively dead at this point, as the comments section of the Kickstarter reveals. 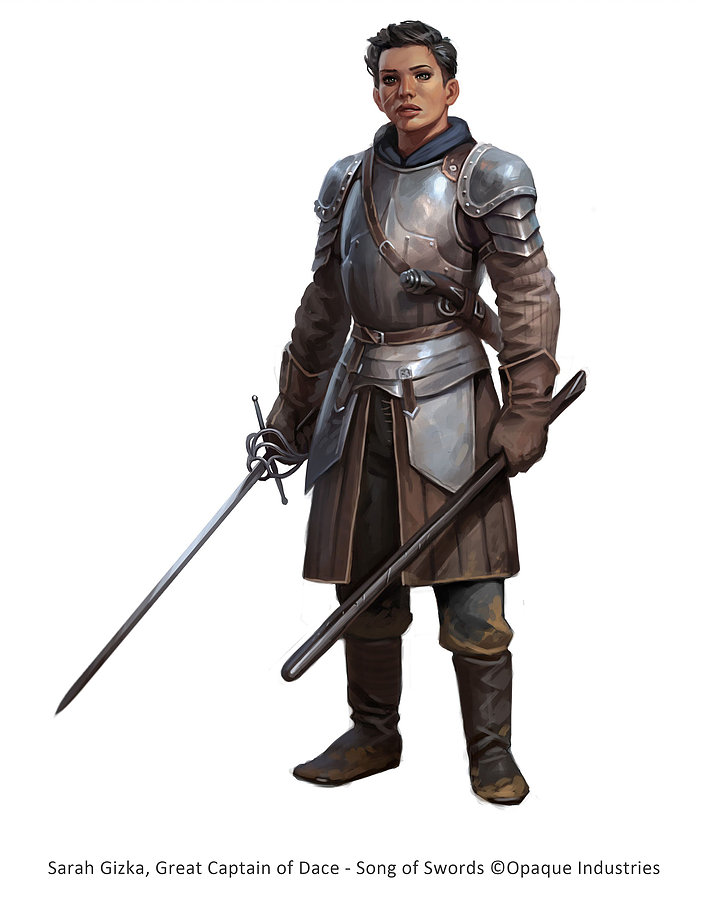 What prompted you to create Song of Swords?

I’d like to say the spark started in High School. We sat down for one of our first gaming sessions (D&D 3.0 at the time). In our first encounter, our enemy was decked out in armor, and Taylor (who was playing a rogue) wanted to shoot an arrow through his visor. “Um… you can’t do that,” was the response. Here we were, playing the world’s most popular tabletop roleplaying game, and we couldn’t even aim our shots! I’d say that point is what started us down the road.

Don’t get us wrong, we love tabletop games of all kinds. We’ve played many different systems and homebrews since then, and while some came very close to the kind of experience we were looking for, none of them ultimately delivered.

At the end of the day we realized that if we wanted a gameplay system that gave players the kind of control we wanted from a roleplaying game, we’d have to make it.

Every tabletop RPG is opinionated in its own way. For example, D&D is about power progression, because the rules explicitly focus on it. Apocalypse World is about character interaction. Fate Core is about manipulating the flow of the story. How is Song of Swords opinionated? What does it focus on?

Song of Swords is absolutely focused on risk vs reward decision making. We’re all about the core of the gameplay, the real meat to sink your teeth into, being combat. For example, of course your characters progress and get stronger over time–but no matter how strong you are, if you’re surrounded by 15 guys with greatswords you’re going to have a bad time. Song of Swords is about tactical gameplay.

The prepared, the clever, the innovative, the risk taker… if you as a player have ever felt like your gaming system wasn’t rewarding you for being one of these, then rest assured you will absolutely be rewarded within ours.

What games most influenced Song of Swords?

There’s this extremely old fighting game called Bushido Blade for the PS1. Does anyone remember that? It was a total eye opener for us. Combat was fast, and decisive. Being slashed by a sword was often the end of a match. They didn’t use health bars at all.

Similarly, the Dark Souls series offered us a lot of inspiration in terms of how we wanted Song of Swords to feel. It’s edge-of-your-seat combat that can be over in a flash. We wanted the world to be dark and gritty, without being a stale repetition of overused themes. That’s something I think Dark Souls really delivered on, and something we accomplished in our own right.

As far as tabletop games go, Pathfinder and Dungeons & Dragons were of course big inspirations. Riddle of Steel was also a great look at what a more complex combat framework could look like, but felt a bit clunky. And GURPS was a great take on a modular system that could fit anything.

Combine all of these things: the visceral, emotional feelings of the video games, the refined nature and rougher framework of the tabletop games, and you get the major gaming inspirations for Song of Swords.

How fleshed out is the Tattered Realms setting, and what sets it apart?

Extremely fleshed out! We’ve got iconic characters, lots of information about the races and regions (some of which can be found on our website and in the Beta PDF) In fact we have a wiki that our existing fans have put together: http://tattered-realms.wikia.com/wiki/Tattered_Realms_Wiki

For years Jimmy has been interacting with our original community, providing them weekly, often daily lore, and answering questions spanning from ‘What great wars were fought?’ to ‘What’s the most bizarre kind of crop people harvest?’ (the answer is Kesh and yes, it does have a wiki entry: http://tattered-realms.wikia.com/wiki/Kesh. At this point we have the entire history of the Tattered Realms mapped out, down to some shocking detail. Not all of that is public just yet, but it’s there.

We’ve recently begun releasing lore spotlights on our website’s blog, so if you just want a glimpse into the world of Vosca that’s a good place to start.

As for what sets it apart: Vosca is a very deep and complex world. Right off the bat as players read about the races you’ll come across quotes that give them unique flavoring. Vosca (and by extension the Tattered Realms) is a dark place, taking a lot of lore inspiration from original versions of European fairy tales. It’s made to feel both familiar for those who know the classic fantasy tropes, without being a carbon copy. One of the biggest design points for us was that there is no “ambiguously evil race” like Tolkien orcs for PCs to slaughter. People are people, and there are always two sides of an argument–much like real world history.

Lastly, I’ll say that one of our strongest elements are the characters, and stories that surround them. It’s not just a big sandbox world with country names on a map. We have an immense depth of NPC personalities for players to interact with. The NPCs and their stories were really what members of the community latched onto early on–and still rave about to this day. Something the audience has always loved about these NPCs is that they aren’t all the super overpowered Forgotten Realms demi-gods roaming the earth. They are a part of a living breathing lore that serve as examples of what the players can do and become.

The Kickstarter for Song of Swords doesn’t reveal much about Opaque Industries. What can you tell me that would make me feel less concerned about your ability to successfully pull off this project?

I can absolutely appreciate some people wanting to know more about us before committing to the project! It boils down to this: we’re a group of professionals who not only understand the scope of what it takes to complete this project, but also the risks. We have a schedule laid out, and are dedicated to sticking to it.

We did provide some basic background information (along with our full names) on the Kickstarter Campaign page for people to read, but would be happy to talk about ourselves more:

Taylor – Holds a BA in Digital Art and Animation with a focus in Game Design. He’s currently based in the San Francisco Bay Area and works as a Producer at the mobile gaming company Glu Mobile. Before that he worked in the fast-paced world of tech start-ups, with the occasional art commission gig. He met Zach and James while they were all in 8th grade, and have all been playing games together since.

Zach – It was Zach’s idea to take our gaming and turn it into a profession. In college he studied business and entrepreneurship, alongside game design. Learning from the likes of Stone Librande (of Riot, Diablo 3, and SimCity fame) Zach is a dedicated game design connoisseur and tabletop player. He got his chance to work alongside the Chaosium Team (Call of Cthulhu) while in college where he picked up a wealth of tabletop production knowledge. He’s worked at both EA and Ubisoft.

Fun fact: Zach frequently travels to game and hobby shops across California, searching for obscure out-of-date tabletop games. He also collects period-piece swords and has a wall in his house covered with masks.

James (Jimmy) – James is the raw creative drive behind the project. He lives in Santa Cruz, and has dedicated the last few years to bringing the Song of Swords Beta rules to life while working a 9-5. He is the constant communicator between the dev team and the original community. It is also his uniquely creative visions and world-building that has flavored Vosca. James is also our local historian, and whenever he’s not working, he’s very likely listening to podcasts, or reading about historical events.

Fun fact: As a forever GM, Jimmy has taken to ‘setting the mood’ by growing a large playlist of music, soundclips, and often lowers the lighting to deliver an all-star experience. His mastery of drama can be shown by several occassions in which someone in the playgroup has let out not-so dignified shrieks of alarm as he narrates NPCs and events.

Crowdfunding really is a very public endeavor, and we’re happy to put ourselves in the spotlight. Song of Swords is a product we stand behind without question, and a lot of our fanbase does as well (though questions are always welcome). I think that the fact we reached 100% funding within 24 hours is a testament to that.

Ultimately, it’s something we’re very proud of, and I think after becoming a backer, people will find that it’s something they’ll be proud to have brought to life.

Like many of you, we’re veteran gamers. There are a lot of people out there with stories like ours, who have been playing games since High School, and were dissatisfied with the built-in rules to their games.

This is a game for those of you who are not captivated by the trend of “quick and easy” tabletop games out there. You, who want to pick something up and really sink your teeth into it. We’re bringing old-school gameplay values back to the tabletop, but rebuilt with modern design, art, and sensibilities.

Edge-of-your-seat combat. Thrilling player choice. A deep and dark world to explore. It all starts here.

There you have it. I’m afraid I’ve just been persuaded to contribute to yet another Kickstarter, but can you blame me? You can pick up a PDF of the beta rules for free from the Song of Swords website. The Kickstarter has already met its initial funding goals, and ends March 19, 2017.