Glorantha first sprang from the fertile mind of Greg Stafford in 1966. As he discovered the details of this imaginary world, he kept adjusting its cosmology, magic, history, politics, and cultures. Other contributors got involved, and Glorantha became arguably the most thoroughly developed of all fantasy roleplaying settings. 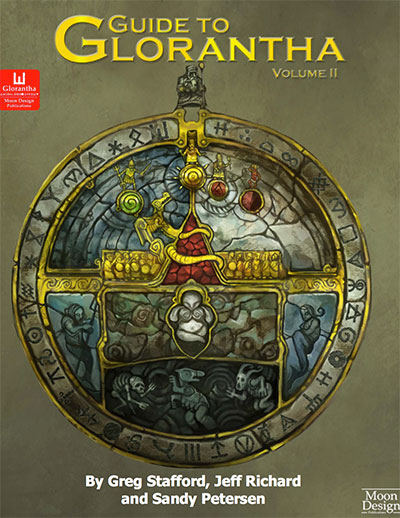 It is a land with elves and trolls and dwarfs, but not the ones you know from Tolkien and D&D. Glorantha is a land where Chaos constantly rears its ugly head, and those who fight against it are just as often in conflict with each other. Magic permeates the world in several distinct forms, and its manipulation is not limited to magicians. The rivalries and histories of the gods directly affect their followers.

The massive Crimson Bat fills the night sky with terror while the armies of the Lunar army march below it. Vile Broos spread the diseases of Malia, the unfathomable Dragonewts advance their immortal plans, the Mostali toil at their machines, and in the darkness the Uz fight Chaos and rail against curse that brought the Trollkin. Adventurers seek renown and heroes enter the realm of the gods in search of knowledge and power.

I first encountered Glorantha as a teenager in the early 80s, and it bowled me over. I ran lengthy campaigns using the second and third editions of RuneQuest, and later the second Mongoose Publishing edition. Over time understanding of Glorantha grew fragmented as different companies produced Gloranthan material with varying levels of support, and RuneQuest, the primary vehicle through which most people discovered Glorantha, became a less mainstream game.

Thankfully a few years ago a small publisher called Moon Design began pulling together all of the copious material created by Stafford and others, with the aim of preparing a canonical text that would define and describe Glorantha in glorious detail. 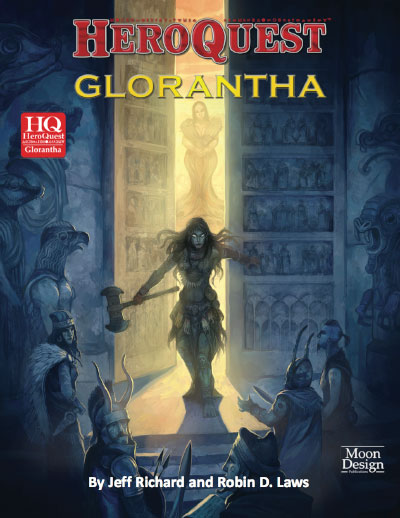 Propelled by a blockbuster Kickstarter campaign, Moon Design produced the Guide to Glorantha, the canonical reference work that lays out the geography, history, politics, and magic of this astounding world. All of the upcoming Glorantha products, regardless of who is creating them, are built atop the Guide. It comes as two massive coffee table books — 800 oversized pages — stuffed with evocative text, gorgeous art and exquisite maps. It has to be seen to be believed. The Guide is also available in PDF. The companion Argan Argar Atlas provides 125 pages of splendid maps covering every corner of Glorantha, and is available in print and PDF.

Possibly the best way to get a feel for Glorantha short of reading the Guide or finding a tabletop campaign is to play King of Dragon Pass(Android, iOS, Windows Phone). It places you in control of a fledgling clan in Dragon Pass, the most storied region in Glorantha. You attempt to keep your clan growing and healthy as you fight neighboring clans, ward off Chaos, deal with strange magics, attempt to understand the wishes of the gods, and rise to greatness as the leader of a great tribe. It’s a resource management game, a game of politics, and a game that teaches a lot about the primal forces at work in Glorantha.

You can also follow the rise of the hero Argrath as he confronts the Lunar Empire in the Prince of Sartar webcomic, which is also set in Dragon Pass.

There is much more to Glorantha. You can get an overview of the setting and what differentiates it from other fantasy worlds at Glorantha.com.

Over the years several versions of RuneQuest and HeroQuest have been produced. Both games at one time were primarily focused on Glorantha, and have since been made setting-independent. Now, with the Guide to Glorantha as a foundation, new material is being published for both games, as well as 13th Age. Whether you tend to prefer the narrative focus of Hero Quest, the gritty details of RuneQuest or the d20 feel of 13th Age, Glorantha is more accessible than ever to a wide range of gaming styles.

Written by Robin Laws (Feng Shui, the GUMSHOE system, Hillfolk, et al.), HeroQuest Glorantha is a refined presentation of HeroQuest tailored for Glorantha. It just released in PDF form and is coming soon in print. If you are into narrative-driven games like Dungeon World or Fate Core, you may find this the most approachable point of entry into Glorantha.

It contains “an introduction to Glorantha and the primary setting areas (Esrolia, Prax, Sartar, and Tarsh); how to create characters from those cultures; rules for Rune magic, spirit magic, sorcery, and Lunar magic; seven cult write-ups; community rules; heroquesting rules and examples; Gloranthan monsters; an introductory adventure and suggestions on gaming in Glorantha. Plus lots and lots more.” The previously-released Pavis: Gateway to Adventure, Sartar: Kingdom of Heroes, and Sartar Companion (all available from Moon Design) are fully compatible with HeroQuest Glorantha.

Pete Nash and Lawrence Whitaker, who produced RuneQuest 6, are working on Adventures in Glorantha, which will provide extensive material for running a Gloranthan campaign using the latest RuneQuest rules.

It is slated to include “lists of skills, backgrounds and suggested careers for those cultures mentioned in GtG; mechanical support for playing members of the greater and lesser races; a comprehensive collection of Gloranthan creatures tweaked to support Moon Design’s forthcoming Gloranthan Bestiary… the changes required to use RQ6 Magic in a Gloranthan context; rules for Glorantha’s metals, crystals and other weird substances; heroquesting at differing social levels; some converted magical items; and last but not least, guidance for converting cults over to an RQ6 format.”

RuneQuest was the original Gloranthan RPG, so a detailed sourcebook for using the latest (and arguably best) version of the RuneQuest rules in the Gloranthan setting is eagerly awaited, to say the least. It’s due by the end of 2015, and you can keep up to date on its progress by checking the Design Mechanism forum.

Jonathan Tweet and Rob Heinsoo (D&D 3.0 and 4.0), who created 13th Age, launched a Kickstarter project to fund development of 13th Age in Glorantha. Focused on heroquesting, the supplement contains new character classes, modifications to existing classes, rules for incorporating Gloranthan runes into13th Age, Chaos creatures, and more. It is in a second round of playtesting and seems to be progressing well (as Rob Heinsoo put it in a recent update, “I’ve never had so much fun during a deadline week. Jonathan feels the same. We love this project.”). If you play 13th Age, D&D, or other d20 fantasy games, this may be the easiest path into Glorantha for you. When it’s finished, 13th Age in Glorantha will be available in print and PDF.

A recent shakeup put Greg Stafford back at the helm of Chaosium, the original publisher of RuneQuest. Moon Design is still the custodian of Glorantha, but perhaps Stafford’s return to Chaosium will open up possibilities for new licensed Glorantha publications. There has been a fair amount of discussion about the possibilities of blending Fate Core and Glorantha, but to my knowledge nobody has gone after a license to publish a Fate Core Glorantha book. Glorantha is admired by many a game developer, so who knows what the future will hold!