Like its predecessor Edge of the Empire, the Age of Rebellion Core Rulebook is a tremendously fun game. It is built for creating campaigns in which the players characters are heroes of the Rebellion. Because this isn’t a traditional murder-hobos-in-search-of-power-and-treasure affair, this sort of campaign may require more than the usual up-front discussion between GM and players to be sure expectations are aligned.

The game’s core mechanics give gamemasters and players the lattitude to introduce twists and turns rather than mere success or failure, and the overall feel of play is Star Wars through and through. The visually stunning rulebook reinforces this, evoking the struggle between Empire and Rebellion.

If you’ve ever wanted to take down an AT-AT, form up for a run at a Star Destroyer, or infiltrate an Imperial command post, Age of Rebellion may be the game for you.

The Players and the Campaign

We just finished an eleven-session Age of Rebellion campaign. I ran the game for three players: Emerson, Manny, and Matt. Earlier Matt ran an epic Edge of the Empire campaign that was hands-down my favorite campaign ever as a player (see my EotE actual play review). So we came to Age of Rebellion biased in favor of FFG’s approach to Star Wars.

Collectively we’ve played a wide variety of games, from Apocalypse World to RuneQuest, over a long stretch of time. I cut my teeth on D&D in the early 80s, and the rest of the group has been roleplaying since the 90s. Our tastes have changed a bit in the last couple of years, and we haven’t been exploring as many different games. That’s primarily because we’ve been splitting our time between D&D 5 and Edge of the Empire, both of which have kept us fully engaged.

We enjoy games that cultivate deep immersion in the setting, we enjoy thrilling stories as much or more than the thrill of victory, and we’re easy marks for well-produced game books with evocative art.

The campaign was built around a simple foundation — the player characters were a Rebel direct action cell created to hit the Empire hard where they least expect it. They were given wide lattitude, lots of autonomy, and a broad mandate to sabotage high-value Imperial facilities, assassinate particularly effective enemy military and political leaders, and disrupt important operations where possible.

They were an unconventional bunch, to say the least. Matt played Knife, a cunning and manipulative R5 unit with a voice synthesizer. He wanted all droids to be free of human control. Emerson played TC–21, a protocol droid who believed any Stormtroopers he encountered were responsible for the death of his maker, whom he worshipped as a diety. IG–186, the Magna-Droid and former Separatist, was played by Manny.

We hit upon this campaign concept after a brief initial run I set up several months ago, in which the characters were operating under a more traditional military leadership structure. I ran them through The Perlimian Haul and Onslaught at Arda I, and everyone enjoyed the sessions, but something wasn’t quite right for our group. The players told me they didn’t have enough agency, enough control over their characters’ actions. 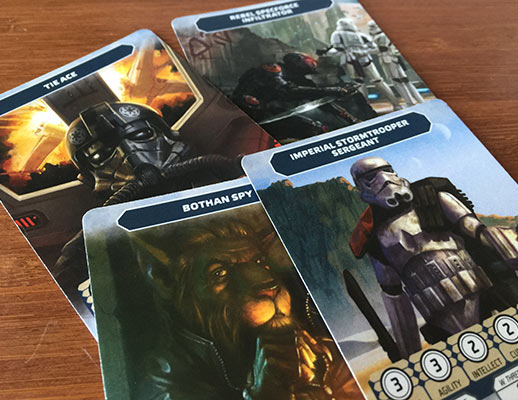 So when I offered to run Age of Rebellion again, we took a different approach. Instead of NPCs giving the characters missions, they’d determine the missions, plan them, and carry them out on their own. This requires a certain amount of flexibility on the part of the GM and players alike. The group really matters here. With a different group of players I might have been fine sticking to more typical commando team operations, spy missions, or fighter squadron exploits.

Our initial concept of three droids running amok was somewhat comedic by design, but we discovered that this was difficult to pull off in a sandbox setting. The comedic elements in roleplaying tend to be reactive, almost as though the GM is the straight man and the players are the comedians. Without some sort of narrative frame, the comedy can fall a bit flat, and the story doesn’t gel.

We discussed this after a few sessions and decided to cap the campaign with a grand finale. The core of the campaign became a cat-and-mouse relationship between and Imperial Navy Intelligence officer and the PCs. Once we had that focus, everything clicked, and the last few sessions of the campaign were really engaging and fun. The culminating session was probably the most satisfying campaign conclusion I’ve ever run — against heavy odds, the droids outwitted the Intelligence officer, took an Admiral hostage, and delivered an Imperial heavy cruiser to the Rebellion.

The Game System in Play

Characters in Edge of the Empire are assigned a Career, which broadly defines their base skills, and an initial Specialization. Each Career offers a mix of Talents (ex: as a Commander you have access to Commanding Presence, which makes it easier for you to perform leadership actions and maintain composure). Experience points are used to advance in skill ranks and obtain more Talents. Over time they may also be used to add new Specializations. This approach to character creation and advancement will be familiar to anyone who has played a class and level system like D&D, but it also provides a more granular feel, as character improvements may be made in small increments.

Based on our exposure to Edge of the Empire, I assigned experience points rather liberally, but I wasn’t not concerned that this would unbalance the game. The system makes it very difficult to kill a player character, but also extremely difficult for them to wipe out big baddies. This is a great way for recurring villains to surface without any fudging on the GM’s part. 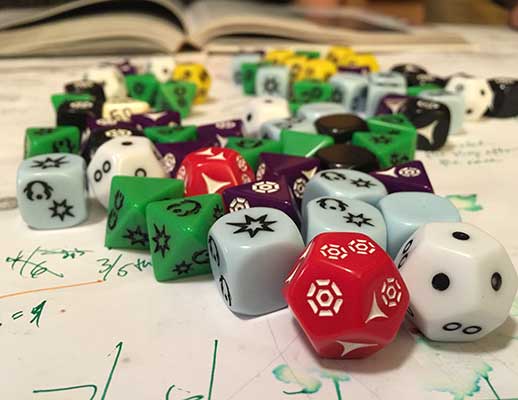 Age of Rebellion employs a mechanic called Duty to help drive the story. Duty is a measure of why the characters fight, and can be used to help keep a game from devolving into randomness. We felt it unnecessary to use Duty, but for beginning players and GMs it could be a helpful means of driving the story.

As with all three Fantasy Flight Games Star Wars RPGs, Age of Rebellion uses custom dice. The Beginner Game box includes them, but you have to buy them separately if you’re using the Core Rulebook. We were already used to the dice, and we like the range of outcomes they provide – in addition to success and failure, characters can accrue advantages and disadvantages that affect the narrative effect of the die roll. That said, they do take getting used to, and it can take a few moments to construct the dice pool for a given roll, then determine the outcome.

This is perhaps the biggest point of contention around FFG’s Star Wars games. For some the dice mechanics are one of the game’s key strengths, and for some a big drawback. There are times when the die results present a challenge for the GM, such as a relatively straightforward task that generates failure with several advantages. In play we don’t worry too much about such situations. The mechanic is meant to provide cinematic outcomes, but only where it makes sense. If this notion grates on you, this FFG’s Star Wars games may not be right for you.

Destiny Points, another mechanism shared by all three of the Star Wars games, are used by players and the GM to affect the game at key points. A Destiny Point is never decisive, but flipping one over can be enough of a nudge to tip a roll or alter the outcome of a scene. It’s enough to provide narrative impact without overwhelming the dice mechanics, and it’s a great way to ratchet up the tension of an important encounter.

As with Edge of the Empire, integrating spaceship movement and combat into the flow of a session can at times slow things down. In this campaign spaceships were used primarily as transport, and battles consisted primarily of the PCs running away from the Imperial heavy cruiser that just wouldn’t leave them alone. Deck plans for some of the more important ships, or even a few cutaway drawings like the one shown in the Dead in the Water scenario included in the Age of Rebellion Game Master’s Kit would have been quite helpful.

The Force appears in Age of Rebellion, but not nearly to the degree that it is incorporated into Force and Destiny, which is all about Force-wielding characters. In Age of Rebellion you can play a Force-Sensitive Emergent, which gives you access to special Force Talents. There are also three Force Powers: Move (essentially telekinesis), Enhance (upgrading your physical capabilities), and Forsee (getting inklings about the future). Because Force-Sensitive Emergents are untrained, their Force capabilities are useful but limited when compared to full Jedi.

The Age of Rebellion supplements are quite handy. Onslaught at Arda I provides a useful introduction to how player characters can be integrated into large-scale battles. The career books flesh out character options and provide more weapons, gear, and vehicles.Edge of the Empire has been out for a while now, and the range of supplements for that game can be used with Age of Rebellion.

We found Special Modifications, the Technicians sourcebook, particularly handy for our droid-centric campaign. Also, FFG’s Star Wars adversary cards are tremendously useful for the gamemaster. Need a quick NPC? Just grab a card. All these supplements and cards don’t come cheap, but the core rulebook alone provides more than enough material for a serious campaign.

FFG’s intent is that Force and Destiny can be smoothly integrated with the other two core rulebooks in order to create all sorts of exciting dramatic possibilities. The Force was put on the back burner with the first two books, but it’s front and center in Force and Destiny. Obviously a droid-centric campaign isn’t the best way to explore the crossover possibilities, but I’m sure many intrepid gamemasters are already constructing campaigns that pull from all three books.

Here are links to reviews and more info about all three of the FFG Star Wars RPGs.