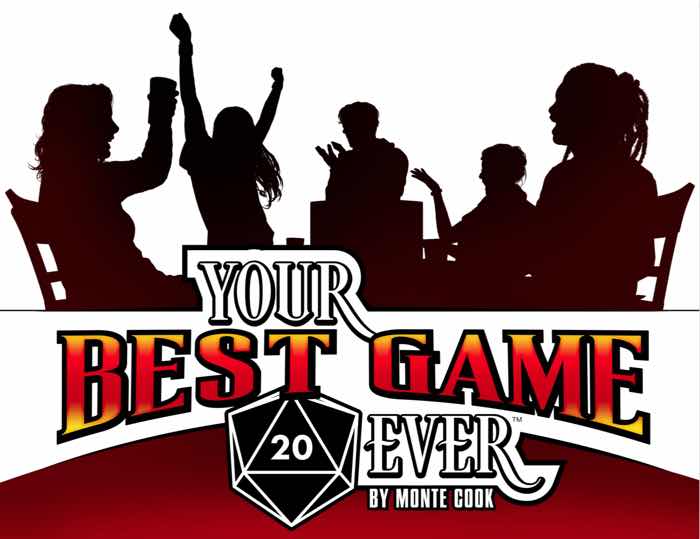 TL;DR: This 240-page book takes years of hard-won experience about how to make roleplaying awesome, and lays it out cleanly and clearly. It’s easy to read, easy to understand, and it provides enough details without becoming a chore to read.

If I’d had this book back in the day, it would have shaved years off my learning curve as a player and GM.

I didn’t back the Kickstarter for Your Best Game Ever because it looked a bit too good to be true. I’ve purchased and read many roleplaying guides. Most of them concern themselves primarily with GMing, and most are aimed squarely at what happensinthe game. This is fine, and there are several excellent guides to help GMs run better games. Along the way, they often hit on questions of how players and GM should work together to create awesome sessions and campaigns. But until Your Best Game Ever I’ve never come across a professionally-produced book that addresses the hobby as a whole: how to get started, how to play, how to run a game, and how to collaborate to make your games enjoyable for everyone.

Your Best Game Ever was created to be a holistic primer on the hobby, a treatise on what roleplaying is and how to do it. As it says in the introduction, “It’s a how-to book for all the things that we take for granted, but probably shouldn’t.” Monte Cook has been creating and playing tabletop RPGs for decades, and his experience shows. This the work of a true master of the game, and it keeps the lens pointed directly at the human aspects of roleplaying. We spend hours sitting around a table talking with each other, but we seldom talk about how to facilitate and nourish the communication and collaboration that drives the game forward. 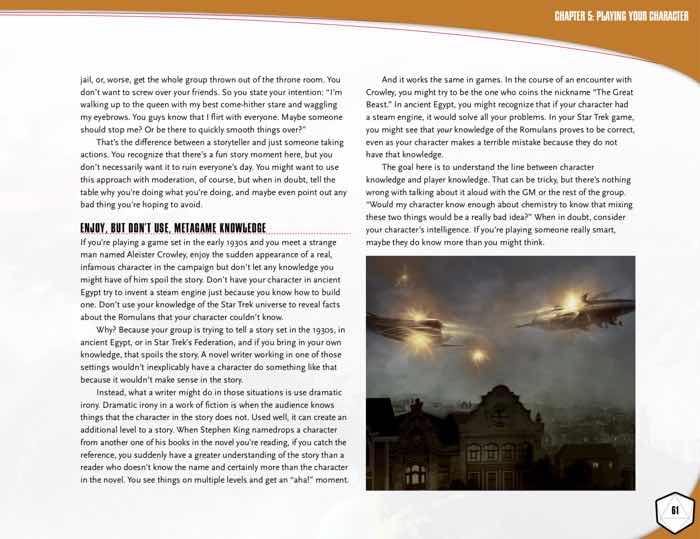 Your Best Game Ever is well written and edited. There’s an unforced and engaging conversational tone to the book. It’s also cleanly laid out and well-illustrated with images from the extensive and enticing Monte Cook Games oeuvre as well as lighthearted comics from a variety of artists.

I sat down to skim it and wound up becoming so engaged that I read the whole thing over the course of a few hours. We often focus on the contents of books like this, but attention to detail in how it is presented is what separates amateur efforts from a professional product. This really shows in Your Best Game Ever.

The book is segmented into four primary sections: Roleplaying Games, Being a Great Player, Being a Great Gamemaster, and Getting the Most Out of RPGs. Tips from tabletop RPG luminaries are also sprinkled throughout, and there’s a section at the end containing a variety of themed recipes like “Cyberpunk Street Noodles” you can use to enliven game nights. Finally, the book ends with a handy index.

This section describes what tabletop RPGs are and how they differ from other games. Cook sets the tone here that he follows through the book, defining tabletop roleplaying as “joint storytelling” and hammering home the point that successful play lies not in victory, but in collaboration. He then points to online video as a vehicle for gaining a broad understanding of roleplaying, and discusses the range of play styles, genres, and games available in the tabletop RPG universe.

In keeping with the overarching emphasis on human interaction, this section is filled with wisdom about creating a safe space, separating in-game action from player-to-player communication, and building a group that works for everyone at the table. Because Your Best Game Ever is intended to function as a manual for roleplaying, this foundation is vital in educating readers as to not just why roleplaying can be awesome and how to get into it, but what we should all expect of each other. I find Cook’s firm but practical approach refreshing and inspiring.

Being a Great Player

The world of tabletop RPG advice is skewed heavily toward helping GMs. That’s unsurprising, given that game mastering takes more effort and carries more individual responsibility than running a player character in many respects. But there are also many things about the contributions and responsibilities of players that we take for granted.

This section delves into how to build a great character, what to bring to the table, and how to work with other players and the GM to keep the game moving forward in a positive way. I’m particularly taken with Cook’s deft advice about how to handle in-game failure. For younger readers in particular this is extremely useful in setting expectations and avoiding arguments.

The section ends with a fairly in-depth exploration of player character bonds and player character arcs. Neither are new concepts, but they’re described quite effectively here. In both cases the mechanical effects are left vague, to be determined based on the rules of the game being played. Bonds are a means of establishing relationships between player characters. For example, rivals might be motivated to outdo each other, providing a bonus when they are in action together.

Arcs are “like stated goals for a character, and by progressing toward that goal, a character advances.” You can create one for your character, define how it might be resolved, and work toward that resolution. You can also adapt more arcs along the way. This is an interesting way of rewarding players for striving to achieve character-specific goals within the broader story of a campaign. While it may be too codified for some players and GMs, it’s a good way of reinforcing immersion in character if that’s something you strive for in your campaign.

Being a Great Gamemaster

I mentioned earlier that there are plenty of books about GMing. That said, I’ve never seen the role so elegantly delineated as it is in this section of Your Best Game Ever.

As with previous sections, Cook focuses on the human aspects of the role:

Just because your role is different and has unique (and more) responsibilities doesn’t give you any special power over the players or the game. 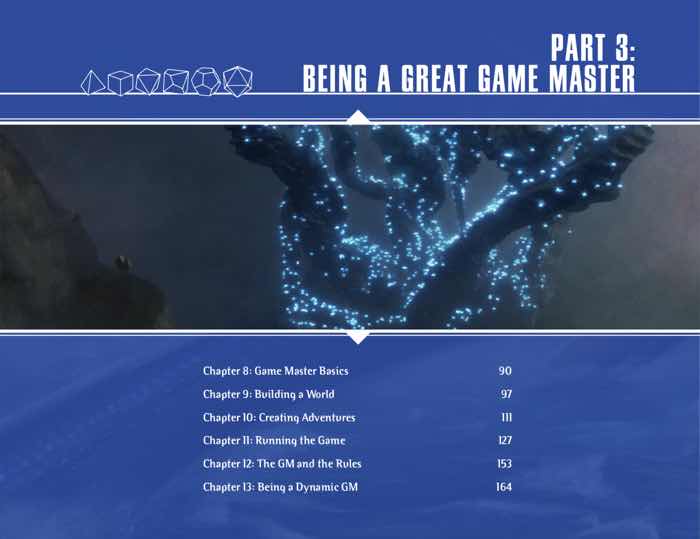 Again he’s drawing a bright line expectation that cooperation and collaboration are the driving force of successful roleplaying. From there he moves on to the skills that make a good game master, from plotting and pacing to description and NPCs. As you’d expect from the creator of Numenera, there’s a wealth of information on worldbuilding, from the pros and cons of creating your own world to determining when and where to add scope and details. A checklist of elements that provide verisimilitude jumped out at me as a powerful tool for checking your world building to make sure it’s not going off the rails.

Adventure creation comes next, followed by running the game, absorbing and using game rules, and finally upping your GM skills with more advanced techniques. Learning how to game master isn’t a linear process, but this sequence feels just right. There’s a lot to absorb, but Cook lays it out skillfully.

Game mastering is an art, and there are always differences of opinion about artistic endeavors. One of the things I like most about this book is how deftly Cook sets up the boundaries and articulates how a good GM can operate on one end of those boundaries or the other. In other words, while it’s never a good idea to overpower players or negate their efforts, there are a variety of viable techniques to challenge and engage them.

Getting the Most Out of RPGs

This section covers the stuff that generally gets left out of tabletop RPG advice books, which is the nuts and bolts of getting a gaming group together, gathering ’em at the table, and making sure everyone is having a good time. There’s solid advice here about how to approach the interpersonal aspects of our hobby. One of my favorites is simple but powerful:

You’re there to have fun, and if you’re not having fun, fix the situation or get out of it.

The chapter on online play covers how to get the most out of digital tools without pointing to specific products, which is smart because today’s hotness may be tomorrow’s also-ran. Points to consider for a safe and professional streamed session are also outlined, though no technical details are addressed.

Callout blocks, each with a detailed suggestion for how to improve your gaming, are sprinkled throughout Your Best Game Ever. The authors of these tidbits are a who’s who of tabletop RPG luminaries – Matthew Mercer, Jennell Jaquays, Monica Valentinelli, Eloy Lesanta, and Matt Colville, to name a random few. The tips vary in applicability, but several of them are excellent, and a handful had me mentally clapping, because I know from experience how powerful they can be. The exhortation to Make Interesting Choices, Not Good Ones from Susan J. Morris and Matt Colville’s simple but astonishingly effective suggestion to ask players what their characters feel are pure gold, and John Rogers wins big with this thought about character motivation:

And even if you’re in a post-apocalyptic hellscape, well, it was somebody’s dream not to be a simple War Boy but instead score the sweet gig playing flamethrower guitar while swinging off wires on top of the eighteen-wheeler.

Yep, the book includes a dozen themed recipes so you can whip up something interesting to nosh on (or sip) at the table. While pizza and burritos are always a safe bet, it’s good to have other options. Also, it seems presentation matters:

Tonic water makes drinks glow in the dark under a black light.

I had no idea.

Get the Word Out

Your Best Game Ever should be handed out to every person who is about to play a tabletop RPG, has just played for the first time, or has played a few sessions and wants to level up their game. Even if you’re a crusty veteran like me, it’s worth reading and worth having around. Buy it, keep it at your table, and be liberal in lending it out to folks.

I reviewed the PDF, thinking I wouldn’t likely find the print version necessary. It’s well-linked and hasn’t given me any trouble using a variety of PDF readers on Mac and iOS. That said, I’m going to have to spring for the hardcover. It’s a handsome book full of wisdom, and it belongs on every tabletop roleplayer’s shelf, mine included.

You can buy it directly from Monte Cook Games in PDF or print, and the PDF is available from DriveThruRPG.