A while ago I asked people on Google +, Reddit, and Tumblr when they were introduced to tabletop roleplaying, who introduced them, and which game they first played. The results of my thoroughly unscientific poll showed that while D&D is the single biggest onramp to tabletop RPGs, its dominance in that regard has declined over time.

Now let’s take a look at some of those games other than Dungeons & Dragons, and the people who bring newcomers into our hobby. 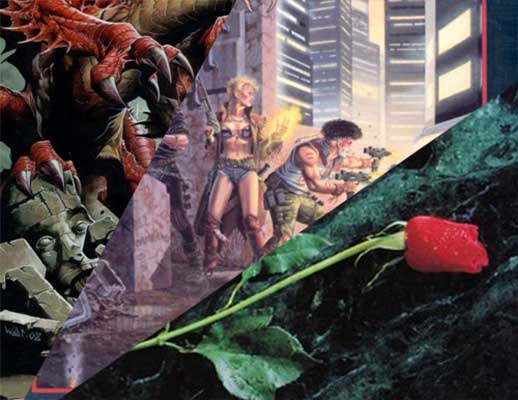 It makes sense that as more and more games are produced, people come into roleplaying through a wider variety of games. Fantasy is the most popular entry genre, represented (aside from D&D) by Das Schwarze Auge, Donjon,Drakar och Demoner, Dragon Age, Dragonlance 5th Age, Dungeon World, FantasyCraft, Pathfinder (yes, I know), RuneQuest, and Warhammer Fantasy Roleplay, accounting for 11% of responses.

Vampire: The Masquerade and its World of Darkness kin constitute a genre of their own, with 07% of respondents starting with one of these games, usually in the 1990s.

Games licensed from books, movies, TV, and video games account for 07% of responses. Of those, Star Wars, Marvel Superheroes, and Dragon Age led the list. Interestingly, Marvel Superheroes was the first game for respondents in three different decades – the 1980s, 1990s, and 2010s.

Me and My Friends

People were introduced to roleplaying by classmates, friends, siblings, friends of friends, parents, cousins, coworkers, teachers, game store gatherings, and online communities. Friends topped the list, followed closely by classmates (who ostensibly became friends through gaming). Four respondents have excellent parents who introduced them, and three were introduced by someone they dated.

I Guess I’ll Have to Do It By Myself

Before the Facegoogle, it could be difficult to find other roleplayers. Really difficult. So it’s unsurprising that of the 15% of respondents who learned their first game on their own, all but three of them did so before the year 2001.

Several respondents noted that they’d been interested in RPGs (read the books, watched others play, etc. – usually in grade school) for a long time before actually jumping in as players. This says something about accessibility, especially for younger players. We now have games like Hero Kids, Michtim, and the upcoming No Thank You, Evil. If we want to help all those curious, imaginative would-be-gamers find an easier path into roleplaying, we need to find more ways to publicize these games other than Dungeons & Dragons and get them into the hands of kids.