Last year I didn’t write an end of the year summary, mostly because the numbers were continuing to decline and because I was pretty exhausted. I’d moved from a job that had wrung me dry to a job that required a fast ramp-up, and in 2018 Unpossible Journeys just wasn’t all that high on my priority list. However, I did resolve to give it more love in 2019. And UJ did get more love.

I directed my attention to the blog in particular, and published 32 posts, including three written by guests: Burrito King’s Guide to GURPS (which was viewed over 2,100 times), Erwan Roudaut’s groundbreaking Tattoos in Tabletop Roleplaying Campaigns (which also garnered over 2,100 views), and a review of Degenesis: Black Atlantic by Pablo Ruiz Valls.

In 2018 I only published twelve posts, so I consider this a big improvement. I also confirmed that meaty, substantive posts are more valuable to visitors than smaller hit and run posts. All the blog experts say it’s better to keep posting like clockwork, because that’s the best way to build an audience. But I’d rather put out a smaller number of thoughtful posts. This approach better suits my temperament and frankly there are enough filler posts on the Internet already, without me adding to the list.

Asking questions and digging into research and analysis fires me up. So I wrote three posts over the course of the year about how the tabletop RPG landscape is changing, with an emphasis on the 800-lb. gorilla,Dungeons & Dragons. First, I dug into how well D&D is doing as a product. Then I examined how D&D 5e became so successful. Finally, I looked at the effect of D&D 5e on the rest of the tabletop RPG industry. That post got picked up in Google Discover, which made it the most viewed piece of content on the site for the year, with just under 10,000 views.

Of all the blog posts I’ve written, reviews tend to be the most evergreen. Star Wars is still the king in this regard; published almost five years ago, the actual play review of Star Wars: Edge of the Empire pulled in over 2,300 views this year. I tend to run lengthy campaigns, and I prefer to only review games I’ve played for more than a couple of sessions, so I don’t expect to be churning these out with any kind of regularity.

Thought it wasn’t viewed nearly as much, I had fun working through a practical game classification system focused on objective characteristics rather than game design frameworks. I plan on continuing this effort in 2019. When I’m satisfied with the system, I’ll add it to the game listings. Speaking of which, at the end of this year I finally carved out enough time to overhaul the main Find Games to Play page by adding thumbnails back, and incorporating quickstart links. The page now provides links to detailed info for some games, links to free quickstart PDFs, and in some cases both.

Of the games listed in Find Games to Play, the following had over 300 views Dread (with over 1,300 views), Monster of the Week, Star Wars, D&D, Beyond the Wall, Tales from the Loop, Mythras, and Call of Cthulhu. The Your First Game page pulled in over 5,500 views and the Become a Game Master page was viewed over 3,100 times. 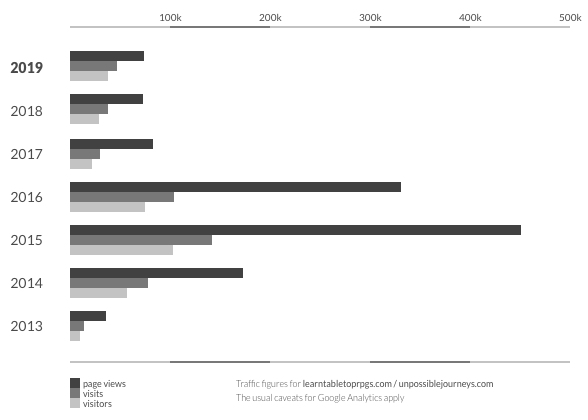 The nature of the hobby has shifted since I first created this site in 2013. D&D has assumed a much larger profile in popular culture, and tabletop roleplaying as a whole has expanded greatly. There are too many livestreams, vlogs, and gaming podcasts to track, and frankly people are more inclined to watch and listen than to read. While I may run some experiments with audio or video, I derive more satisfaction from writing. So UJ will remain an outpost for people who are comfortable gathering info about gaming via the written word, but its importance in the galaxy of tabletop roleplaying resources won’t likely ever reach 2014-2015 levels.

However, I do hope it will continue to provide value for people who are returning to the roleplaying scene after an absence, to newcomers who need a hand getting started, and to D&D players looking to branch out and try other games. That last part is particularly important to me — D&D’s influence on the tabletop RPG industry is massive, and in the past this has led to big highs and brutal crashes. So I’ll be turning my analytic lens toward new models for gathering audiences, new approaches publishers are taking to build sustainable businesses, and other ways we can insulate the hobby from the ups and downs of the industry. Lately I’ve also been pondering how WotC has positioned D&D as an experience that encompasses many facets beyond the books themselves, and how the indie scene on Itch.io is nurturing and revealing new talent. Both trends are worth examining.

One last thing: I’ve also started a deliberately small, low-key Discord server for UJ. If you’d like to join and talk about existing content, pitch me a collaboration of some kind, or or just discuss tabletop RPGs in general, come on over.